Logan Henderson retired from the army after twenty years of service and nearly dying on his last mission. When his neighbor begins having trouble with a stalker, he takes it upon himself to watch out for her. The problem is that he lusts after her as he watches her. He believes he is too rough of a lover for someone like her. Somehow he has to keep her safe from not only the stalker, but from him as well.

Tina Antonelli works as a coding consultant during the day and spies on her hunky neighbor at night. When the man who attacked her a year ago but was never caught returns to stalk her, Tina accepts her neighbor’s offer of help. But will her attraction to him lead to even more problems?

She returned to her office and sat down to work. As often was the case, her thoughts drifted back to her neighbor. What color would his eyes be? He had a crew cut, but his hair was definitely black. She already knew he had a nice sprinkling of chest hair. She just didn’t know what he looked like up close. If only she had the nerve to go introduce herself.

“Face it you’re terminally shy and a coward to boot.”

The doorbell rang, causing her to jump. She huffed out a breath, padding downstairs to see who was at the door. She looked through the peep hole, but didn’t see anyone. She frowned and walked to the living room window to look out behind the drapes. The UPS truck backed out of her driveway and drove off.

“Great. I wonder if he left the package or not?”  Funny, she couldn’t think of anything she had ordered.

She disengaged the alarm system then unlocked the door. When she opened it, a box about ten inches square sat on the door step. It looked innocent enough. She picked it up and groaned.

It wasn’t hers it belonged to her next door neighbor, Logan Henderson. Now she knew his full name. Well, now she had to go introduce herself.  I could just leave it on his doorstep ring the bell and run. Naw, that would really be a cowardly thing to do she decided.

She looked down at what she had on. Her usual Saturday at home outfit of cut off shorts and a tank top. Should she put on jeans? Why did it matter? All she was going to do was hand him his package and leave. At least she would be able to find out what he looked like up close.  That thought cheered her up. She ran back inside and grabbed her key to lock the door behind her. She secured the door and carried the package next door.

His house was a nice, older home with a wraparound front porch. She had seen him sitting on it a couple of times, but not often. It was made for rocking chairs and a porch swing, but there wasn’t a swing. The front door was a huge wooden structure that sported etched glass windows. She admired the door for a few seconds then admonished herself for dragging her feet. She debated on knocking or ringing the bell and decided the door bell would be better in case he was still outside. Maybe he would hear it.

She rang the bell and stood waiting for several seconds before she heard the locks click, then the door swung open. It took everything inside her not to let her jaw drop at the sight of him standing in the doorway.

The first words that came to mind were big and tall. He stood well over six feet four or five inches, and he was built like a mountain. Funny how he didn’t seem nearly this big from her balcony, she realized. The next thing that came to mind was that he wasn’t really handsome so much as rugged looking. Gray jogging pants hugged his thighs and waist. A tan T-shirt stretched tight across his massive chest. He had a square jaw, a slightly bent nose, and small scar at the corner of his strong mouth. His eyes though... They were as dark as the blackest night and just as cold.

Tina jumped at his deep voice. “Um, the UPS guy left this at my house by accident. I was just bringing it over.” She held the box out towards him.

He took the box from her hands and their fingers touched. Something like a spark crackled between them. She jerked her hand back and rubbed at the spot with her other hand.

“Thanks,” he grunted and pulled away holding the box.

He backed up and started to shut the door, but Tina was determined to introduce herself. She wasn’t going to give in to her shy side this time.

“Um, my name is Christina Antonelli. My friends call me Tina. I live next door.” She held out her hand. “It’s nice to meet you.”

He grunted, but didn’t hold out his hand to shake.

“Well, damn!” Tina knew she was a bit of a recluse, but she wasn’t rude. No wonder he never had company. No one would want to be around him if he were always like that.

She sighed and returned to her house. Maybe he was just tired after working in the yard all morning. Or maybe she had caught him at a bad time. Or maybe he was the antisocial asshole he appeared to be, she told herself. Whatever the reason, she wouldn’t bother him again. But that didn’t mean she couldn’t still watch him.

He released her only to lay her back on the bed, so he could cover her with his body. He wanted her beneath him. He wanted to keep her safe. He would be the one to torture her. He would tease her mercilessly with his tongue and teeth. The delicate shell of her ear fascinated him. He licked and kissed her there until she squirmed beneath him. Then he crossed over to the other one, treating it to the same devilment. He sucked in the lobe and nipped at it with his teeth.

Her hands began exploring his body. She ran them up and down his chest, teasing his nipples with her fingernails. He groaned and nipped at her neck in protest. She only squirmed closer to him. He moved his mouth south until it came into contact with her camisole. His fingers moved the straps to the side and traced a pattern across the tops of the swell of her breasts just above the silky material.

He sat back to watch as he ran his hands beneath her camisole and ease it up over her breasts. His mouth watered at the sight of them. He drew the material over her head and off her arms letting it pool on the floor beside the bed. Logan reached out and mounded her breasts with his hands. Then he bent forward and flicked each nipple with his tongue. He sucked one in and took in as much of her breast as he could manage while pinching the nipple of the other one. She hissed out a breath and pressed her breasts up into his face.

Tina’s nipples were distended and large. He tugged on them enjoying the moans and groans it elicited. They were the prettiest shade of dusky pink. His tongue teased them endlessly until she grabbed his head and held him in one place. He laughed and pulled back long enough to look into her eyes. They were heavy lidded and dark with passion. He knew that feeling. His cock was fighting the constrictive clothes he had on, but he couldn’t remove them or he would be inside her in an instant. He wanted more of her first. More of her moans and cries of passion.

He slipped his hands down into her panties to pull them down her legs until he could remove them all together. They joined her camisole on the floor by the bed. He felt her fingers grab hold of his chest hair and tug at him. He smiled and leaned in for a kiss. She tried to take over by flipping him on his back, but he just rolled with her until she was once again on the bottom. Her squeals of frustration were music to his ears. He laughed and swatted the side of her thigh.

Logan ran his hands down her sides until he could hold her hips with each hand. He kissed his way down her abdomen until he reached her neatly trimmed pussy. He breathed in the scent of her arousal. She was wet. Her glistening curls shimmered with that desire. He ran his tongue down the center of her and listened to her moans of delight. He spread her legs apart with his hands until his shoulders fit and could keep her spread for his pleasure. He licked up and down her sweet lips until she squirmed to get closer to his tongue. He ignored her silent pleas and used his fingers to spread her lips so he could reach deeper for her honey.

He teased her with his tongue at her clit until she grabbed at his head to force him where she wanted him. He laughed when she couldn’t get a grip on his hair, since it was so short, but then changed his tune when she reached his ears and held on. He pried her fingers from his ears and gave her what she wanted. He flicked his tongue over and over on her clit until she was near the verge of coming. Then he backed off and entered her with a finger. He added another finger and fucked her with them.

He searched until he found her G-spot and stroked it until she was wild with need. He licked and sucked at her clit until her pussy muscles contracted around his fingers. When he knew she was nearly there, he stroked her sweet spot and sucked hard on her clit until she exploded around him. She squeezed him with her pussy and her legs until he thought he might lose his breath. He barely managed to throw a pillow over her face to muffle her screams of ecstasy. All he needed was for Riley to come crashing inside with him between her legs. As it was, he had already screwed up by being here in the first place.

She lay panting and spasming beneath him. He began to get up from the bed, but she sat up with him and grabbed the waistband of his shorts.

“You’re not going anywhere yet. You aren’t finished,” she said.

“Tina, I don’t think you realize what you’re saying.” 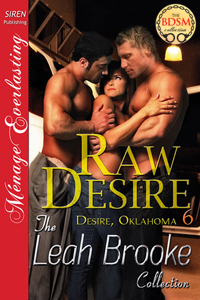 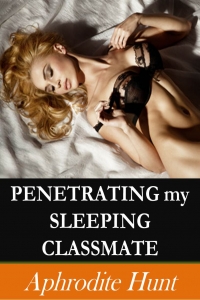