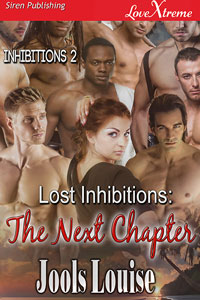 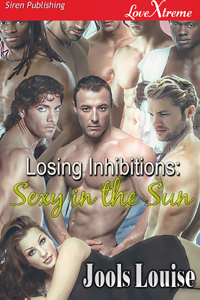 Lost Inhibitions: The Next Chapter (LoveXtreme)
Jools Louise
In Shelf
$4.99 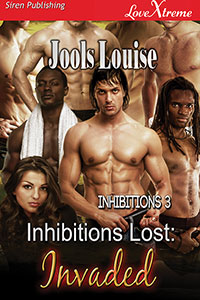 I was cursing myself for my tardiness, since for the first time in about twenty years I was late for something. What had I been thinking? I wasn’t on an extended vacation. Our guests were people in need of a bolt-hole and counselling. My sex life would have to be put on hold for a few hours until our guests were settled in. I couldn’t even blame the rum!

As I neared the compound I heard someone crying. Frowning, I paused to listen. The sound was coming just off the path and I moved toward it.

My eyebrows lifted in surprise. Dean sat with his arms around his knees, huddled next to a tree, sobbing his heart out.

“Dean!” I knelt beside him, pulling him into my arms and hugging him close. The sobs continued, and his arms went around me clutching me tightly like a lost boy. I rocked him as though he was a child of six instead of a man in his midtwenties. He cried for several minutes before subsiding with an exhausted sigh, his head buried in the crook of my neck. His tears soaked my shirt and his moist breaths shuddered out of him as he tried to compose himself.

“What happened?” I asked the question with a hitch in my voice. His tears had been so heart-wrenching that they hurt me deep inside as I listened to the outpouring of pain.

A pair of aquamarine eyes peeped at me as he lifted his head slightly. Dean had the face of an angel. Longish blond hair, which had lightened to almost white in the sun, fell against his damp cheek. His skin was flawless, never tanning too deeply but over the past few months he had a healthy glow about him. When I first met him he had been quite shy. The youngest of the crew, he was about twenty-four years old and had the most sheltered upbringing of any of us. His parents had died when he was young and he had been raised by grandparents who were both strict and terrified of the ever changing world outside their huge mansion in the north of England.

They died just after he reached the age of twelve, leaving another child to the mercy of a system which failed to vet the people in charge of its most vulnerable. Dean had been sent to a foster home which had turned into his own private hell. Like Harry Potter in the popular wizard stories, he had been forced to sleep in a small cupboard under the staircase of the house. The foster family already had five other children, but Dean had been singled out since he was shy, quiet and terrified of the noisy confusion he had been thrown into.

Five years later the authorities had entered the house to find Dean half starved, bruised, and numb from years of verbal and physical bullying by both the kids and adults in the house. He had not been educated in those five years since his “caretakers” had not wanted the authorities to know what happened in the house. Unbelievable that no one had bothered to check up on a boy who had lost his entire family in just a few years and then had been left at the mercy of a bunch of money hungry bullies. I rarely got angry enough to feel homicidal, but I would definitely feel like hurting someone badly if I ever met up with the greedy bastards responsible for Dean’s abuse.

Fingers were pointed and blame was cast by everybody involved. No one took responsibility until one Jackson Channing Murray took charge and seized a frightened boy of eighteen from the torment, taking him under his wing. Dean was not stupid by any means, and under Jackson’s care he caught up on his education. He suffered night terrors, and once or twice I had been awakened by his screams in the night. I let Jackson tend to him, feeling more confident in Jackson’s ability to reach the terrified boy inside the man. This was the first time I had been there to catch Dean.

My hand brushed the damp hair away from Dean’s face, and I placed a tender kiss on each eyelid, soothing the reddened skin. Tears welled again, threatening to fall and I felt my own eyes fill at the despair in those beautiful blue-green eyes looking at me.

“Are you scared?” I kissed his cheek, smoothing my thumb along his smooth shaven jaw.

“I can’t do this,” he finally whispered to me, his mouth brushing my jaw as he spoke hesitantly.

“I don’t think I can help these people. I’m not qualified at anything like the others. I’m not an ex-soldier. I’m not an extrovert or a joker or a psychologist. I can’t do what they want me to do.” Dean began to cry again. “I’m stupid, why would anyone want me here?”

I was devastated that Dean felt this way. Here I was grumbling because I’d slept in, and Dean was feeling like crap. He was so quiet a lot of the time that he sometimes got pushed to the back and we all assumed he was okay since he wasn’t telling us any different. My God! How stupid did I feel at that moment?

I heard the slap of flip-flops on the pathway and a tired-looking Dean showed up yawning. Flopping onto an adjacent seat, he rested his head on his arms and dozed for a minute before hauling upright again and shuffling over to the coffeepot.

Jackson and I grinned at each other, stifling laughter since Dean’s attire was somewhat dishevelled. One butt cheek peeked as he scratched his ass distractedly, his shorts hanging off his hips as though they didn’t fit.

“Dean, do you think perhaps you might be wearing someone else’s shorts?” I asked the question with a snigger, since Dean definitely wasn’t completely awake this morning.

He paused, looked down at himself, and grinned sheepishly.

“Hmm, I wonder what Caleb’s wearing?”

I stared at the cute, perky butt cheek peeking out, suddenly in the mood for a bit of peach. Dean’s hair was damp, as though he’d come straight from the shower, and I caught a delicious whiff of citrusy bodywash and the clean, fresh scent of his skin.

Standing, I gave Jackson an enquiring look and he grinned at me wickedly.

We both moved, going either side of Dean’s sluggish form. I sank to my knees, my hands curving around the tight bubble butt, stroking the bare cheek with my thumb before swiping my tongue along the tempting flesh. I felt Dean shudder and pulled at the waistband of his too-large shorts to bare his entire butt to my admiring gaze.

“Hmmm, this peach looks ripe. It tastes fantastic, too.” I licked his other cheek, squeezing lightly with my hands and plumping the mounds into two perky pillows. I rubbed my cheek against them, then bit into one tenderly. Dean jerked, his low moan of pleasure suddenly muffled and I looked up. Jackson had insinuated himself between the counter and Dean, his hands cupping Dean’s face and kissing him hungrily. Grinding his hips against Dean’s, I could feel the change in Dean’s body as he trembled with lust. I bit down again, then licked the spot, repeating the process until Dean was pumping his hips jerkily in response. He lifted one leg, hooking it around Jackson’s narrow waist, rutting against the man. I pulled on the shorts again, dragging them further down his legs. One of my hands reached between his legs, finding not only Dean’s eight-inch nail, but Jackson’s slightly longer meat as well. Both were naked, hot, hard, and seeping pre-cum.

My mouth licked a trail along the crease of Dean’s cute butt, and he parted his legs wider to allow me better access. His nuts hung heavy and I licked along his perineum before sucking them into my mouth and rolling them around on my tongue, humming with pleasure at the salty taste. Dean writhed, bucking a little as he moaned into Jackson’s hot mouth. He writhed some more as my mouth made a return journey up along his ass and began licking and biting and sucking on the juicy globes of his ass.

“Fuck, yeah!” I dimly heard Marcus’s deep voice, slightly hoarse and full of desire. I glimpsed him in the corner of my eye, then felt strong fingers rubbing my back. Since I had been swimming earlier, all I wore was a bikini and a short wrap. These were easily disposed of and I moaned at the feel of two thick fingers sweeping along the wet crease of my pussy.

I bit down a little hard on Dean’s butt and he gasped. Licking the wounded area I began pushing my hips against the invading fingers tunnelling inside my wet sheath. I could smell Dean’s arousal, mixed with the citrus and his musky smell, and buried my face in the crack between his cheeks. Biting and licking some more, I found the small rosebud and attacked the guarding muscles with my tongue. My fingers still stroked along Jackson and Dean’s cocks, slick with pre-cum. I gasped as the fingers in my pussy were replaced by the thick head of Marcus’s large dick.

My clit was dripping, my sheath slick and welcoming as Marcus dove inside, his hands gripping my hips as he skewered his thick length to the hilt. His mouth licked a tingling trail along my bare spine, his fingers brushing my clit as he began to move. Withdrawing almost fully, he grunted as he pierced me again, then began to stroke with long smooth thrusts, his balls slapping against my ass with each powerful surge of his hips. 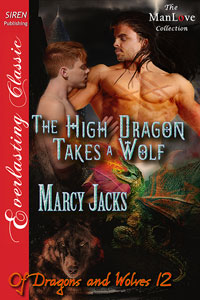