Love and Punishment (Beyond Fairytales series)

Once upon a time…

Bel was a happy girl with loving parents. Now she lives for revenge. At her father’s urging a plan is set in motion, which quickly spins out of control. Expecting to be used and abused by The Beasts MC, who are known for their orgiastic ways, she is prepared to accept her fate in order to execute her mission.

The time has come to even the score with the men responsible for her mother’s death.

Nate and Liam, leaders of The Beasts, have their hands full ensuring the survival of their people as they sell Beast Brew to survive in a city crumbling around them. When a Rose MC member is plucked from their care, the laws of Epsilon demand the perpetrator forfeit his life. But then the leader of The Devil’s Disciples’ daughter offers herself in exchange for his life, and they can’t refuse the beauty’s plea.

Once she’s pressed between them they know their keeping her for their own, but first they must figure out why she’s there. 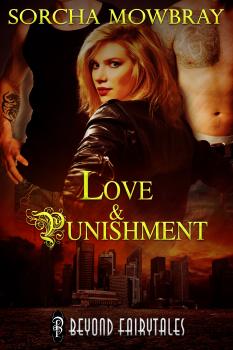 Love and Punishment (Beyond Fairytales series)

The driver stopped before the crumbling amphitheater where concerts and plays were once staged. Tonight’s performance featured her as the star. Her own personal tragedy would play out in living shades of black and gray before the High Council. In the years since The Wave, a civilization-crushing electromagnetic pulse, and the riots after, the council, consisting of a member from each surviving territory, sat in judgment over their EpiCenter. Tonight they judged her father.

Something stank. Unfortunately, it had nothing to do with the charges against her father and everything to do with the pungent chemical smell of the rancid fuel used to power the patchwork-metal car she’d climbed out of. The entrance loomed ahead, the embodiment of things to come, and drew her forward until the rumble of bikes announced more arrivals. Damn, she had hoped to be the last to arrive so she could slip inside to wait for what she expected to unfold. Instead, she found herself transfixed by two men who sat astride their sleds as though the engines rumbled for them alone. The matte-black beasts were harsh and angular, yet beautiful. From the sleek elongated fronts to the extra-wide tire in the rear, the bikes were designed to draw attention. And still, the men commanded every eye in the parking lot.

Of course, as the only person left, her eyes answered their call. One dark and one fair. She saw little actual skin, yet she would have said with absolute certainty both men were packed with muscle. Something about them made any other notion laughable.

Blood thrummed through her veins while her pulse raced. Breath harsh with some unnamed reaction, she could only compare the sensation to having spent two hours sparring with an unbeatable opponent. The air wheezed from her lungs in painful gasps, her muscles trembled, and a fine sweat broke out across her skin. The dampness between her thighs? Not something she would discuss with anyone. Not even her sisters, Briana and Charlene.

Then the emblems sewn on the back of their jackets caught her eye, drawing a curse from her that would have gotten her smacked across the face by her father. Their jackets proudly displayed a grinning skull with a barbed-wire halo and black wings. A snarling wolf in red and black appeared in the boney head where eyes should have been and the words The Beasts MC were emblazoned over the top and bottom of the image. Once she knew they were the enemy their appeal dulled, though did not die. With a sigh of regret, she turned and strolled through the gates of the venue. They were affiliated with the wrong club. Lived in the wrong territory. Answered to the wrong man.