Caroline Carter woke one morning, not really knowing how she’d gotten where she was, but accepting things as they were. When she saw a news story about an old bed and breakfast being auctioned off in a small town in northern Michigan, she felt an unusual pull toward the historical building. Making arrangements to attend the auction, she ended up placing the winning bid. Once the building is officially hers, she begins renovations.

When she finds a letter in an old oak desk inside the office of the bed and breakfast, written by a man named Roderick to his beloved wife, she feels compelled to reply. She’s unable to explain the feeling of contentment and rightness she’s experiencing since purchasing the old building. Shortly after she moves in, strange things begin to happen. She begins having dreams of a handsome man who lives a hundred years in the past, and may very well be her husband!

Roderick Carter is distraught with guilt over losing his wife. She didn’t die, but he’d hired doctors who’d promised to cure her of influenza and return her to him safely. After she’s gone for a month, he sends a messenger to find her, with a note explaining his actions. When the messenger returns with the note, telling Roderick he was unsuccessful in finding the doctors or his wife, he puts the note away in the drawer of his desk at the bed and breakfast he owns.

Much to his surprise, the note is answered a few days later by someone claiming to own the very same bed and breakfast he is currently the proprietor of. When he replies, he learns the woman may just be his long lost wife, and she’s living one hundred years in the future!

Can Caroline and Roderick find their way back to each other or will the desk and their dreams be the only connection they have to one another? 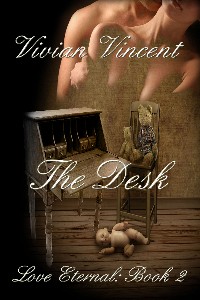 "What?" Caroline asked, surprised. "You're kidding, right? I mean, you're what, seventy, seventy-five years old? If my sister—if I have a sister—was your grandmother, that would make her over a hundred years old. In case you hadn't noticed, I'm not even close to that. I'm only twenty-three, Irene. What you're telling me is impossible!"

"It's not impossible, Caroline. Your sister passed away in 1978 at the age of ninety. I'm one of three grandchildren and ten great grandchildren."

"I don't believe any of this, Irene. You're conning me right?" Caroline rose to her feet and paced the lobby. "So if what you say is true, that would make me over a hundred years old myself. That's impossible!"

"What can I do to prove it to you?" Irene asked, placing a finger to her lips and cocking an eyebrow. "Oh, I know!" She jumped to her feet and walked toward the stairs. "I'll be right back."

"Sure, take your time," Caroline replied sarcastically. "The woman's crazy!"

Irene returned to the dining table with a large photo album under her arm. "Come. Sit," she said, motioning to the chair Caroline just recently vacated. Caroline looked at her with doubt and confusion. "Please? I promise, it'll be worth your time, dear."

"What the hell." Caroline chuckled as she approached the table and sat back down next to Irene. "Enlighten me, please."

Slowly opening the photo album and turning the pages, Irene studied each picture carefully before stopping at one and rubbing over it with her fingers. She gently removed the photo from the protective paper and handed it to Caroline.

Caroline took the photo hesitantly, looking at Irene first, then back at the photo. "It's a wedding picture. So?"

"Look closely at it," Irene said.

Caroline brought the picture closer to look at it. She gasped when she realized whose wedding photo it was. "That's just a coincidence. A lot of people have relatives who look like them," she said, trying to hide the doubt in her voice. She knew the woman in the photograph looked exactly like her and the man like Roderick and it looked as though they were standing in front of the bed and breakfast she now owned.

Caroline turned the photo over and her eyes widened at what she read. Roderick Carter and Caroline McGuire. September 2, 1909. The writing on the back of the photo was identical to her own. She tossed the photo on the table. "That still doesn't prove it's me." Her hands were trembling and she folded them in her lap, not wanting Irene to see how this photo affected her.

"Okay, I can see that's not enough to convince you." Irene began turning pages of the photo album again. "Ah! Here we go!" She removed another photo and handed it to Caroline.

"No, it's not the same woman, Caroline. Turn the photo over."

She turned the photo over and read what was written on the back. Caroline dropped the photo to the table and let out a loud gasp. The photo landed with the writing face up and she glanced at it again. Ian Tucker and Irene Jamison, June 14th, 1954. Not letting Irene see her reaction, Caroline's eyes fixated on the writing for a moment before turning them away. The handwriting on the back of it was eerily similar to her own.

"The woman in that photo is me," Irene said.

"Yeah, I see that, but this still doesn't prove anything."

"Will you just look at the picture again?" Irene asked, her voice raised in irritation. She needed Caroline to believe her if she was going to help her get back to Roderick.

Grabbing the photo off the table and turning it over to look at it once more, Caroline noticed the woman in this photo looked exactly like her also. She thought it was just a coincidence. She noticed the couple in the photo was also standing in front of the bed and breakfast.

"My grandmother told me about you and said we could have been twins."

"Look, Irene, a couple of photos don't prove anything. I really want to believe you. That would explain a lot of things, but things like this just don't happen. There's no possible way I could be Roderick's wife. There's no possible way you could be my sister's granddaughter and there's absolutely no possible way in hell Roderick and I are communicating through an old oak desk. I refuse to believe it. Now, if you'll excuse me, I've got work to do. You're welcome to stay the weekend if you like. If you need anything I'll be out back." Caroline turned and headed out the back entrance to the hotel.