Santa Fe attorney Danny Hanrahan loves life in his adopted hometown. He’s got good friends, a great job, and a gorgeous home. The only thing he’s missing is someone with whom to share it all, but when his trusty assistant Monica sets him up with her sexy son Ashok, Danny quickly considers the “boyfriend” box checked, too.

Ashok is fit, charming, and dynamite in the sack; falling in love with him is a piece of cake. Embracing Ashok’s alter ego, celebrated drag diva Raima Reason, proves to be more of a challenge. Danny divorced his wife for a reason, and it wasn't so he could go out and find someone who takes even longer than she did to put on makeup. When Raima's career looks set to take off, Danny has to decide if he's along for the ride, or if a boyfriend who's sometimes a girl is more than he can handle. 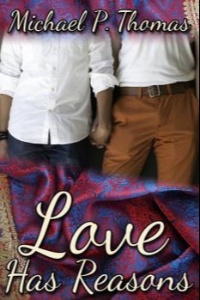 “When are you going to find a nice boy and settle yourself down?” she asked. It was late in the morning after the drag show at The Crossing, and Danny and Monica had sauntered up the shady lane to the Bombay Buffet, their favorite lunchtime hangout across the street from the New Mexico state capitol.

“Oh Monica,” Danny said with a scolding chuckle. “You’re worse than my own mother.”

“Well, you’re not getting any younger,” she teased.

She pulled a concerned face. “As old as that? It’s worse than I realized.”

“Shouldn’t you be having this conversation with your own son?” Danny asked, swiping half a chickpea samosa through a puddle of vindaloo sauce before popping it into his mouth.

“Funny you should mention him,” Monica said.

“You haven’t met Ashok, have you?” she asked.

Monica waved the specter of her two older children away. They had spouses -- well, Anjali had a boyfriend, anyway -- and could fend for themselves. They were out of the house, at least, which could no longer be said of Ashok, who’d been getting up to all sorts of shenanigans since The Big Break-Up last year.

Danny waited two beats, then three, before venturing “much like myself” with a laugh.

“It’s a good thing you’re a lawyer and not a detective, is what I was thinking,” she said, signaling to the beer-bellied young proprietor that he should refill her chardonnay.

“Shouldn’t you be looking for a suitable young wife?” he teased. “You didn’t arrange a marriage for him when he was a little boy?”

She pulled another face, this one with a you’re-not-so-clever tongue stuck out. “It fell through,” she deadpanned. “Because what, you’ve seen one Mira Nair film and you’re going to tell me how it is in Indian culture? You know the ‘old country’ I come from is Albuquerque, right? If you’re fishing for a dowry, you can forget it.” They laughed. “I was this child’s mother, don’t forget. Dear, they practically brought him to me in the hospital swaddled in gold lamé -- we gave up on a ‘wife’ for Ashok a long time ago. But a mother can never have too many swell son-in-laws,” she said. “I’d rather grow old by your pool than in some nursing home.”

Danny laughed again. “Can I meet him before the wedding? At least see a photo? I’m not committing to anything until I get a look under any veil.”

Monica’s eyes brightened under her bouffant bob. “So you’ll let me set you up?”

Monica shook her head. “Guess again,” she said. “I said no dowry.”