Sylvia is at a turning point in her life. Her business is thriving, but there is more to this artist than most people realize. Her personal life has disappointed her, and loneliness haunts her. Daniel is struggling with his new lifestyle. He is trying to get out of a relationship, but that is complicated by his business dealings with the woman's father. With the help of his friends, he realizes he wants the simple things life can offer—without the complexities his new bank balance brings to the situation. In the midst of their personal struggles, Sylvia and Dan enter each other's lives. Beyond a physical attraction, there is a deeper, instant connection between them. But the ease of their togetherness will override their better judgments, throwing them into a world of love and laughter that eventually brings personal and professional sabotage. 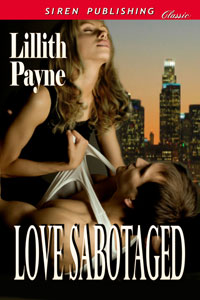 Checking his watch, he figured he could be out of there within the hour. Across the atrium something gold glinted in the soft lighting. He followed the flash around to the other side of the main pool, coming face to face with a vision from his dreams.

She stood almost as tall as him, her dark hair brushed back simply from her face and held in place on each side with a comb. The intricate design of the gold against her chestnut hair was a perfect combination. He let his eyes drop to her face, a regal face it was, with large, dark brown eyes. It seemed she wore no makeup at all. She was just natural. He was drawn to the gold that surrounded her throat. He had never seen anything like it. Realizing he was staring, he attempted to look away but couldn’t.

“May I help you?” Her voice sounded like velvet, and it sent a chill down his spine.

He forced himself out of his daze, trying to engage his brain to speak in a coherent sentence. “I’m sorry. I don’t make a habit of staring, usually.” He searched for the right words. “Your necklace. It’s, it’s so different, beautiful and elegant, yet unique.”

“The combs in your hair, they’re perfect, as if the artisan had you in mind.”

A small smile crossed her lips, but she withdrew a step from him, shifting the glass she held to her right hand.

“I’m Daniel, Daniel Turner.” He extended his hand to her, and she took another step, retreating from him.

“Hello, Daniel Turner.” She didn’t offer her name or her hand. “If you’ll excuse me, I must be going.” She turned and walked slowly away, the brown silk of her pantsuit flowing over the curve of her hips down her long legs.

Daniel was confused. Didn’t he just introduce himself? Did she dismiss him without telling him her name? His pride wouldn’t let her get away with that. Especially since he was enamored by her at first sight. He followed her toward the main hall, catching up with her just before she left the building.

“Excuse me, I don’t mean to be rude, but I didn’t catch your name.”

She looked him up and down, thought for a second, and then replied, “That’s right, I didn’t give it.” She tipped the coat-check woman, taking the long, brown velvet cape from her and wrapping it around her shoulders.

“Good night, Mr. Turner. Enjoy the party.” She headed out the front door, leaving him standing confused in her wake. When he realized she was gone, it was too late. She seemed to have just disappeared into the cool winter night.

He was annoyed with himself on many levels. Standing outside the Frick, the night air brought him back to his senses. Returning to the party, he stopped, enquiring of the coat check if she knew the woman. He was disappointed to learn she didn’t, refused her offer to get to know her better and then slipped back into the main stream of the party. Brandi was nowhere to be found, although her parents were holding court in the center hall.

He was expecting an evening of languid lovemaking and found a new side of Sylvia and himself. Along with the food, she brought a present for herself. One she wanted him to share in the knowledge of its existence. After an amazing lust at first sight round of sex where he’d pulled down her pants, pushed her belly over the back of his sofa, and took her pussy from behind, they’d relaxed and opened a bottle of wine. He made a mental note to replace a condom in his wallet so he’d have one handy the next time lust took over. Then she’d showed him her new toy. Somehow, he was astonished that she’d share that information with him at all. But then after spending time with her, he realized it was her being honest and about sending him away with thoughts of what he was missing.

Her toy was literally a toy cock. It was about the size of his erect cock, he figured at first sight of the plastic phallus. While her face had gone red when she first showed it to him, by the time they got the plastic wrapping off, any embarrassment was long gone. She’d given it a quick wash and remembered to bring fresh batteries. They neatly inserted them in the correct directions after several tries.

“I’m going to try this out,” she told him when the machine was lightly buzzing in her palm. “Want to help?” Sylvia had drawn away from him slowly, backing out of the room so he could see her running the toy over her neck and shoulders.

He had to gulp for air before he could stand when she sucked the tip of it between her lips just before she left his sight. “Fuck me,” he said, all but stumbling to get up and follow her. By the time he reached the bedroom, Sylvia had stripped and was lying naked in the center of his bed. One of her hands held the toy to her breast, her nipple hard and peaked. Her other hand was dropped to her crotch, her fingers lazily gliding across her clit. It was a sight he’d never forget.

“Don’t stop,” he told her when he entered, pausing only to strip off his clothing before he walked to the side of the bed. He didn’t resist rubbing his cock a few times, the ache already building. Lying beside her, she seemed lost in her motions until he spoke. “Where do you want me?”

“What would you like?” she asked, no coy tone to her voice.

“I want everything, but to start, let me lick you while you play with your tits.”

“I’m already playing with them.” She laughed at his groan. “How about you lick me for a bit, and then we’ll see what happens.”

Daniel didn’t answer verbally, instead he used his hands to push her legs apart, watching them fall to the side and open for him. He needed no further invitation and insinuated himself between them, where he could lick and finger her and still see what she was doing.

“That being me or your new toy?” He went back to licking her and inserted his index finger in her pussy.