This new box set by best-selling author J.D. Walker features seven sexy stories of men who find love through the power of music. Contains the stories:

I Can't Get No Satisfaction: Georgie Baldt is dissatisfied with his life. Working dead-end jobs leaves little time to find that spark he’s lost, let alone someone to love. Then a trick from his past becomes his new produce manager. Ry Archibald remembers Georgie, but they end up arguing constantly at work, despite the sexual tension between them. Georgie decides it’s time for a change. Will Ry tag along for the ride?

Love, Love Me Dude: Tory Cuthbert is shocked when Wheeler Ridley, a man from his past, arrives at his motel. Meanwhile, there’s Maury Landrum -- handsome and willing, yet Tory can’t seem to take the next step. When Wheeler hits on Tory without recognizing him, Tory reveals all. But Wheeler remembers things differently. Then Maury resigns. Tory has to act quickly before he loses what he never knew he had, forever.

Loving Me, Loving You: Hanson Yoo is tired of his job, and doing things to please his mother. A harrowing encounter at night in an alley leads him to Lindsey Grier, a man he’s sure would never look at him twice. But he is looking, and Hanson doesn’t know what to do about it. A serious misstep and a life-changing moment lead him to take charge of his future and do something for himself, this time.

Norwegian Woody: Woodrow “Woody” Anker grew up with the Zumpanos, and he’s in love with the eldest son, town Sheriff Rafe Zumpano. Problem is, Rafe is an alcoholic in denial and Woody wants to know why. When he finds out the truth, Woody doesn’t know how to move beyond all the lies. It takes a punch in the face, a hard kiss and even harder words to get these men to a place of trust. And love, maybe.

Paint It, Black: Engelbert Trentworthy -- call him Trent -- doesn’t take himself seriously. He sleeps around, thinking that’s all he deserves because of his black past. And then, he meets photographer Elias Lane, whose photos of Trent cause havoc in his life. Elias wants more from Trent, but Trent’s not having it. So the dance begins, and Elias will do anything to get past Trent’s barriers, because he’s perfect.

Purple Daze: When Gabe St. James meets Beebub Beaumont, he knows it’s love. But his best friend is larger than life and not meant for the small town in which they live, and all too soon, he goes away to college. The day Beebub comes home, all the feelings Gabe has tried to bury return to the surface, and resentment rules his actions. Beebub wants Gabe, but Gabe, he’s not so sure anymore.

Take Me Back: Gus Atchison despises Seb Paddington for choosing a job in another state over their relationship. But Seb keeps coming back to town, trying to start something up between them again. They end up arguing and finally call a truce. However, when Seb returns four months later, he’s too thin and Gus realizes he still has feelings for Seb. Will Gus take him back? Or will they remain at odds forever? 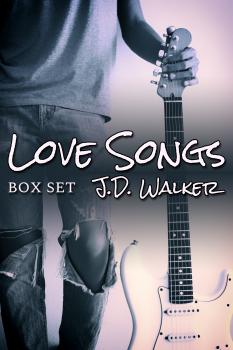 The engine shut off with a cough and I got out, shutting the door with a slam. As I walked to where Beebub sat, I called out, "How long have you been sitting out here?"

"A while." He stood, shivering, and followed me inside the house. I was glad for the heat, and he was, too, probably. "Marlene didn't say where you went," he said. "Everything okay?"

I nodded as I removed my outerwear, hanging the worn coat on the hooks in the wall. I did the same with his before leading the way to the kitchen.

"I spend time with my dad every Christmas." I set about making coffee while Beebub sat at the table.

"Oh, that's right. It would have been his birthday today." I was surprised he'd remembered. And secretly pleased.

I handed over a steaming cup and sat across from him. "It's my way of keeping him close, even though he's gone." For a moment, my mouth trembled, and I hid it by taking a sip.

"It must have been hard, losing him like that. I'm sorry you had to go through that by yourself."

"I had Marlene. We comforted each other."

Beebub was silent for a minute, then he said, "I'm glad."

I stared out at the setting sun through the window, enjoying the peace between us. After a while, I made more coffee. It was something to do, at least. "How are you doing?" I asked.

He tapped a finger on the rim of his cup. "I'm looking around for a place of my own. The house two miles down the road is up for sale and I'm keeping an eye on it. I also have some projects lined up for the new year, and a few proposals to send out."

A glimmer of his old smirk made an appearance. "You want to know if I've moved on? If Sean ruined me for relationships, in general? Or if you still have a chance, is that it?"

I came really close to pounding his head with a skillet, but Beebub must have seen murder in my eye, because he sobered immediately. "Forgive me. That was uncalled for. I'm okay, really. The trauma has passed, and the nightmares are mostly gone. I've even gone out with a few men, here and there, but nothing serious, so far." He seemed hesitant as he continued, "There is this guy, though, who I really want to get to know again, but I'm afraid of moving forward." And the way he stared at me said it all.

"You can't be serious! First, you make fun of my feelings for you, and now you want --"

He raised a hand as if to ward me off. "I know. I'm an ass, and self-centered, but I wish you would give me a chance, to really show you I've changed. Haven't I been through enough? Aren't my scars ..." He sighed and rubbed a hand over his forehead. "I need someone stable in my life, and you were always there for me. I know I abandoned you, and flaunted Sean in your face, but --"

"And it's still all about you!" I said, talking over him. He made me so mad. "Didn't the Sean debacle teach you anything? Just because someone loves you doesn't mean you can take advantage of them."

"That's not how I meant it! I want to build something with you. What am I missing here?" Everything, moron.

My fingers twitched. "Unless you want me to punch you again and add another bump to your nose, I suggest you never call me that again, and leave." Before I embarrassed myself by sobbing in front of him.

Beebub scowled as he stood. "God, you can be so frustrating. What happened to the kid who would follow me anywhere? Like goddamn puppy?" That dig wasn't fair, even if it was true.

"He grew up and realized that the love of his life was an egotistical, self-centered son of a bitch who thinks he's God's gift to men everywhere. And he really isn't."

"Fine, Gabe. Fine." Seconds later, he was gone, but I still had trouble breathing, and my vision was blurry, for some reason.