Sadie Layne, a creative and motivated high school drama teacher, is grateful for second chances. After surviving breast cancer, she embarks on a celebratory trip to LA with her two best friends. Sadie never expected to run into the handsome and charming Vince De Carlo in the hotel lobby. She hasn't seen Vince much since they worked together in a theater company years ago. Their meeting interrupts her plans and reminds her of the life she left behind.

Vince, a struggling actor and cover model, is in LA to promote a television pilot. His old attraction to Sadie is stronger than ever. He never forgot her, even though a trusted friendship and a scripted kiss was all they'd shared.

The reunited pair give in to temptation, but reality soon collides with lust as strong doubts about their blossoming romance get in the way. Sadie dreads facing her defeat as an actress, and Vince doesn't think a struggling actor like himself is capable of providing the accomplished teacher with what she deserves.

Will the couple find a way to keep their sizzling romance alive and build a future together? Or will their uncertainty win the lead role and smother the flames? 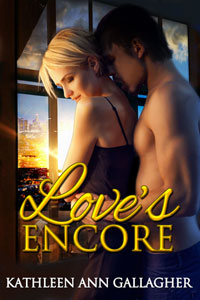 Vince gave Sadie the cutest smile that made her shiver. It was as if she'd told him the secret to the universe. Vince put the menu on the bed. He reached for her, gently took hold of her shoulders, and pulled her close. This time, the kiss was hot and heavy. His fingers trailed along her back, and each stroke made her temperature rise. The sound of her heart beating pounded in her ears as she melted into his strong arms. Who needs food?

"I didn't bring you up here to seduce you," he said, his tone deep, yet low.

"I know, Vince. It's been a long time coming." Sadie sighed as she held his gaze. She wasn't going to miss out on the opportunity to be with Vince. Life was far too short. She had first-hand experience. She was one of the lucky ones. A few of the friends she'd made in the oncologist office weren't as fortunate. They'd lost their battle.

He rested his hand on her thigh. "Do you mean it? If you'd rather grab something in the food court, I'd go along with you."

"It's funny, now that you mention it, so have I. All of the excitement from the show and then being with you. I'm one privileged man." He cradled her face in his hands and moved up close. His lips found hers and locked into an embrace. She uttered a soft moan.

Her decision to push fear aside, along with the gift of a full recovery, gave Sadie the green light to move forward. She smiled and raised her hand to Vince's chest and massaged it, going in circles, moving close enough to feel his warm breath on her face. Every stroke was smooth and unplanned, as if her heart had taken over and led the way. Vince's breathing sped up as he slowly unbuttoned the top of his shirt. She went with raw instinct coupled with intense desire. She hadn't unleashed her sensual side like this before, and now, alone in his room, she wanted nothing more than to make love to the man she'd let get away so very long ago. 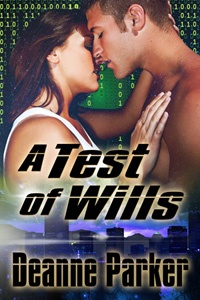 A Test of Wills
Deanne Parker
In Shelf
$2.99

It Started with a Contract (MF)
Sam Crescent
In Shelf
$2.99
Tweets by
sirenbookstrand