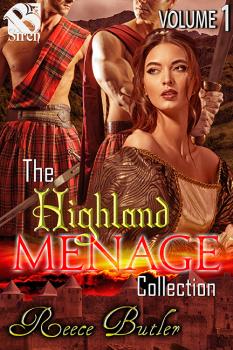 Laird Somerled MacDougal’s enemy attacked with a roar, claymore high. He blocked it so the blade hit his upper arm rather than his neck. Pain exploded. He cursed, dropping his arm but not his blade. Still cursing, he shrugged it off and prepared to attack.

“Nay, none of that. I killed ye!” Niall, his twin, held up his own wooden waster the size of a claymore. “If I’d had a real blade, ye’d be dead.”

“A flesh wound that chopped the meat from yer arm, broke the bone, and mayhaps gouged the ribs under it as well.” Niall shook his head in disgust. “Ye’d have bled out, laird. Dead. I win to fight another day and the corbies will pluck out yer eyes.”

“Sorry, laird, but Niall’s right,” said Torquil. With Tearlach and Rory gone, he was the next eldest. “’Tis a mortal wound. Yer blood would be flowin’ into the dirt as ye screamed.”

“The laird of the MacDougals woulda scream,” he replied, disgusted at the suggestion of such weakness. He was also disgusted at himself for letting such a blow get through his guard.

“Mayhaps, but ye’d still be dead.” Torquil held out his hand for the waster. “So I pluck the blade from yer hand and give ye vengeance.”

Somerled tossed the wooden claymore to Torquil before rubbing where he’d been hit. It would bruise well but might serve to keep his thoughts on what he was doing and not his wife.

“’Tis Meg’s fault,” he complained. “She willna get out of my mind.”

Women complicated things if you cared for them. His father never had, nor the resulting sons. Laird Dougal MacDougal had been the lazy, good-for-nothing youngest son when all his older brothers had been murdered. So he’d called himself laird and created eight heirs plus another eight bastards. Unfortunately he didn’t care to take on less enjoyable duties, such as raising his sons and providing for his clan.

Somerled was nothing like his irresponsible father. He would stay married to Meg no matter what secret she hid from him. He was desperate to know what it was, but he’d promised not to pry and, unlike his father, he always kept his promises.

“All we’ve done is sleep the last few nights,” he added, grumbling.

“Dinna complain about a woman to a man what canna have one,” warned Torquil. His scars showed white against his tanned face and upper body as he warmed up.

Now that Somerled was married he understood what Torquil was missing and would likely never have. He wished even more he’d been able to prevent the whipping that had disfigured him. Life was full of regrets, but at least all of his brothers were still alive. Eight were married and gone. Two of those were lairds and another had been knighted by King James.

“Meg is asleep when her head hits the pillow, and she’s out the door with us afore dawn,” admitted Niall. “I didna ken arranging a Gathering of the Clan would be so much work.”

“She spends much of the day in the village and little with us. I dinna ken what she’s up to, or if I can trust her.”

“What?” demanded Niall. “Why can’t ye trust Meg? King James might have married the two of ye by proxy, but I held the broom ye jumped a sennight ago!”

“Meg didna tell us her first husband was Edgar Campbell of Duntrune, and she willna speak of her past.” He rubbed his mouth to hide the pout that had formed. “She’s been acting like she has a secret. Turning away from me when I see her, and the like.”

“Meg’s first marriage returned the Brooch of Lorn to us and so much more.” Torquil held his sword point up, ready to fight Niall. “Ye dinna mind eatin’ the food she cooks or sharin’ her bed. She smiles at the rest of us, so ’tis yer problem, laird, nay hers.”

“Why would ye ask Meg to plan a MacDougal Clan Gathering if ye didna trust her?” Niall shook his head. “’Tis yerself ye are doubting.”

Somerled crossed his arms, favoring his sore one, and tapped his fingers against his ribs. How could he explain his unease? He stared at the sixty foot high curtain wall that had protected their clan since the year 1220. Duncladach was something he could believe in. It was built by Duncan MacDougal, the grandson of the first Somerled, to protect their clan. He would not allow anyone, even his wife, to harm his people.

Niall kissed the inside of each of Meg’s sturdy thighs. “Is my lady happy?”

“’Twas lovely,” she murmured. “I think I shall sleep now.”

“You have time for more?” she asked, pretending innocence.

“Where’s the oil?” demanded Somerled. “If ye wish to play games with both of us, wife, then yer men will play good games.”

By unspoken agreement Niall laid on the bed while Somerled got the flask of sweet oil. Meg would ride him while her laird took her from behind. Meg squeaked when Somerled lifted her. She was so small, yet she opened herself fully to them both. He reached for her breasts as Somerled lowered her. She smirked at him, knowing how much he enjoyed her nipples. Hands on her breasts, he guided her down. She grasped his cock, giving it a squeeze.

“’Tis no tease, but a promise.” She guided his cock until her hot, moist, heat enveloped him.

She grinned proudly, perched on his groin. Her breasts were heavy in his hands. He flicked her nipples, enjoying her gasp. She clenched him with her pussy muscles and then he was the one hissing. Somerled pressed down on her back. She complied, bringing her face to his for a kiss. These lips, like her others, were hot and sweet. But these had a tongue he could wrestle with. She sucked it as she had his cock. Her eyes suddenly widened.

“If ye tease yer laird he will get ye back,” said Somerled smugly.

“I wasna teasing,” she replied, turning over her shoulder to speak. “And anyhow, you liked it.”

“Aye, just as ye like my fingers in yer arse.”

Instead of answering she began moving, sliding back and forth on Niall’s cock and grinding her pussy into him.

He was a man, a MacDougal, and would somehow manage to stand the torture!

Three fingers in her arse weren’t enough. She needed four, and those twisting, before they could enter her with their cocks. So Niall gritted his teeth as she rode him slowly and far too sensuously. He would not come until she did, and then Somerled. He would be last and enjoy it all. Niall couldn’t touch her clit as she was grinding it so he worked on her nipples. Big, berry-like nipples. He rolled them between his fingers, remembering their taste and texture.

Meg may have heard Somerled, but she was too far into her own pleasure to respond. Niall grimly held on, to his growing need to come as well as Meg’s nipples.

“Aye lass, let me get some more sweet oil in ye, and then I’ll stick my cock as deep as it’ll go into yer arse.”

Meg shifted back, almost off Niall’s cock, in preparation. She could take but one of them at a time. Sometimes she lost herself and rode them both. It didn’t happen often, but when it did, it was marvelous. Meg’s new position gave him a chance at her clit. He wasted no time, putting his finger on her button and wiggling. She made that sound in the back of her throat that he thought of as a reward. A grimace on his brother’s face meant he was entering Meg slowly and fighting the need to go deep.

Somerled choked. “Yer wish is my command, my lady.” Her eyes went wide. Niall kept her clit busy. “This what you wanted, wife?”

Meg didn’t reply. She sank onto him. Niall wasn’t prepared for it and hissed at the need to control himself at the pressure and friction. She rose and fell, then rubbed back and forth on him.

“Make her come for I canna last,” ordered Somerled.

Niall couldn’t do anything with his cock as Meg held him down, but he could play with her nipple and clit. It worked. She gasped and clenched around him. He gritted his teeth, fighting the need for his own cock to explode as Somerled roared, hauling Meg back to fill her arse. He bellowed, pumped again, and then fell back with a groan.

Meg panted, eyes glazed, holding herself up with her palms on his chest. He took her hips in his hands and met her golden eyes.

“Do you think you can give me a third?” she asked between gasps for air. ’Twill help me sleep.”

It was a joke as she was near gone as it was. His laugh was closer to a choke. This was his Meg, full of her men, having had two orgasms yet able to joke and demand a third. He angled himself and her body to hit the part he knew would set her off. At least he hoped it would. He pumped, thinking he might not succeed this time. But Somerled leaned over Meg and took over her breasts and nipples.

She convulsed around Niall’s cock, keening. Finally, he came, filling his wife with his heart and soul, the only way he could say his love. Meg cried out, his name on her lips. A moment later she collapsed. He held her tight, her breasts to his chest, as they both fought to breathe.

“God, how could we live without ye?” he murmured. 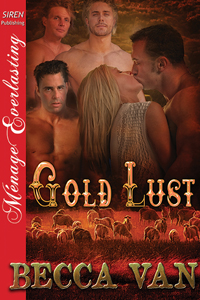