Miami marketing expert Robin Long agrees to help her best friend, Bella, with her soon-to-arrive newborn. What the overweight and overworked executive doesn’t expect when she arrives in Pleasure, Montana, is to fall in love with Bella’s two hunky neighbors, Matt and Clay Stegman.

Both men adore the fact that she has some meat on her bones, and they spend the next two weeks trying to convince her that they are the right men for her. After Clay encourages her to pose nude for him, his photos illustrate a happy and beautiful woman. Never have two men made her feel so adored and appreciated.

But when she puts on her Miami clothes and excessive makeup at her good-bye party, the men believe being herself might be too hard to maintain once at home. What can they do to convince her to return and join them in a thrilling ménage relationship? 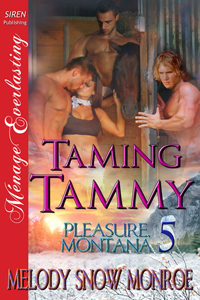 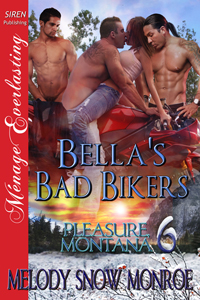 Clay Stegman knocked back his beer. “Here it comes! Get ready.” While it might have been superstitious, he leaned forward on the living room sofa and crossed his fingers, hoping his best friend, Trent Stafford, would win the best album of the year at the Country Music Awards ceremony.

Hawk and Clete Knight banged together their beer bottles, and the room finally got quiet.

Clay’s brother nudged him. “You should have gone to support him.”

“I just got back from a three-week tour with Trent.” Clay had collected at least a thousand pictures of the country singer. His fans were going to love the shots he’d taken, but the sessions had been intense. “I needed a break.”

“Ha. You just wanted to be here when Bella’s girlfriend comes to town.”

“So what? Bella’s hot. Her Miami socialite friend has got to be, too.”

Bella patted her bulging belly. “It’ll be a while before anyone considers me hot.”

Her husband slipped next to her and kissed her cheek. “Miami, you’ll always be hot to me.”

Bella did look beautiful despite being almost nine months pregnant. Not only was she a bit anxious about having her first child, but she was worried about her best friend, Robin. Bella had told all of them that given Robin’s high-stress job, her friend needed a little help relaxing. Would they be willing to help?

No red-blooded cowboy could turn down that request. The reason Bella gave Robin for the visit was that Bella would need help when the baby came. Apparently Robin never could say no to her. The last time Robin agreed to help, she ended up swapping identities with her best friend.

Possessing the remote, Bella increased the sound. Tanya Steel, last year’s best female vocalist, floated out from stage right in a long white dress. He didn’t know what the fuss was about her. While she was pretty, she was way too thin for him. Christ. He bet a guy with any muscles would break her in two during sex. What ever happened to women like Marilyn Monroe or Anna Nicole Smith? The good ones died too young.

The hostess smiled and read the names of the nominated artists.

“The winner of the best album of the year is—” She waited a few seconds before ripping open the envelope. “Trent Stafford.”

Applause broke out in the elite award ceremony audience. Clay jumped up and whistled. He was thrilled for his good friend. No one deserved this more than hardworking Trent. It didn’t hurt the value of Clay’s photos either. They just became more valuable. While he never spent the money he got from being the president of Trent’s fan club, it was nice to know people would be clamoring to get an inside look at the famous man.

The camera panned to the Pleasure native as he walked up to the stage to receive the award. Clay probably should have gone to the Mountain View Bar & Grill to celebrate with the rest of the town, but the crush would have been intense. Whenever a hometown boy did well, everyone went wild. In truth, he’d rather be at his boss’s house enjoying the award ceremony in comfort.

Bella lowered the volume. Not that the group wasn’t interested in the rest of the awards, but one of the reasons he’d come over was to get the scoop on Robin Long, Bella’s girlfriend.

Clete got up from the sofa and disappeared into the kitchen. He brought back a tray of snacks and more drinks. “I got a call this afternoon. I’ve got to head out East and take care of some business.” He placed the food on the coffee table and kissed his wife in an apparent apology.

Clay leaned back on the sofa. “Who’s going to pick up Robin?” He wanted to be the first to volunteer for the job if Bella hadn’t assigned anyone.

Bella smiled. “I would ask Hawk or Raven, but I know they have deadlines to meet.”

The fact that her other two husbands were both in their on-site motorcycle shop right now implied that was the truth. “I can go.”

Matt nudged him. “Not without me.” He nodded to Bella. “Knowing Clay, he’ll be a little heavy-handed with the seduction, and she’ll turn right around and hop on the next plane back to Miami.”

Clay feigned being offended. “Me? I realize she’s only coming for two weeks. I’ll be good.”

“You telling me that if she’s hot you won’t try to get her in bed?” He cocked a brow.

Bella rubbed her stomach. “Listen. I asked Robin here.” She pressed her lips together. “I just want you to show her a good time. My best friend has been working nonstop since I’ve been here. Her company works her to death, and she doesn’t date or have any fun.”

“You worked together for a while, didn’t you?”

“Yes. That’s why I know she needs a warm Montana welcome.”

Clay smiled. “She’s come to the right place. Does she like snow?” It was February, and the ground was coated in the stuff.

“She likes walking on the beach and wearing tank tops. I don’t know about snow.”

He looked at his brother whose brows were both raised. “Fine. But during the two weeks she’s here, Matt and I will entertain her. We’ll get her to love what Pleasure, Montana has to offer.”

Bella smiled and rubbed her stomach again. “I appreciate you doing this. I’d drive to Bozeman and pick her up myself, but I fear that in that one-hour drive, the baby will decide to come.”

Clay leaned over and lightly clasped her arm. “Don’t worry about a thing. We will take care of Robin like Clete, Hawk, and Raven took care of you.”

Clete chuckled. “Give the girl a chance to know you first.”

Matt was not smiling. “I’ll make sure he keeps his dick in his pants for a few days.”

They all laughed, though he had every intention of foiling that attempt.

“You ever doubted that we love you?”

Nobody had loved her in so long that she’d lost hope of dreaming about it. “I think you should prove it to me by getting back to what you two were doing.”

Both of them laughed. “Yes, ma’am. Clay, this one is going to be trouble.”

“You can say that again, but it’s the kind of trouble that turns me on.” Clay slipped between her legs and tugged off her panties. “These will only get in my way.”

She expected Clay to clamp his mouth over her pussy and start sucking. Instead, he licked her inner thighs with feathery flicks while his thumbs massaged to the right and left of her pussy lips. She wiggled her butt to get him to move closer, but he seemed content to torture her with pleasure.

Matt at least hovered close and lifted her breasts. He brought them together. “So beautiful. I could look at these all day. Maybe when you come to Montana we’ll have to institute a new rule. No clothing allowed.”

He was talking crazy. They’d freeze to death. “That goes for you two also.”

“Absolutely. We want to be ourselves at all times.” He lowered his face and planted his lips between her breasts.

His mouth traveled over to the breast nearest him where he drew circles around the nipple with his tongue. Sparks of need shot in every direction.

It was as if both men were deaf. Maybe they were buzzards in disguise. They kept circling her most tender spots without touching. Then, as if they were telepaths, Clay licked her opening at the same time Matt grabbed her nipple with his teeth. He tugged to the point of pain then let go and gently licked the tip. Clay followed his lick with a nip at her small bud. The combination caused torrents of need to descend on her.

Clay threaded a finger into her weeping hole and swirled it around, hitting nerve ending after nerve ending. Heat built, as did her climax. When he added two more fingers and swept them around, he hit another sensitive spot. Her moan came out loud, and she started to breathe hard. The sensations swamped her all at once. Matt scraped his teeth along one nipple then changed to the other side while plucking the first nipple. He alternated, going faster and faster until her swollen nipples were shooting streaks of electric sparks across her body.

Using his teeth, Clay caught her clit and then sucked hard. Spasms rolled down her. Her pussy moistened, and her breath caught. The onslaught of sensations stirred her. This was what she wanted. This was what had been missing in her life.

Clay suddenly pulled away. She looked up. “Why did you stop?” His grin told her what he wanted. “You want me on my hands and knees, right?” Please say yes.

Matt leaned back and helped her get into position. He must have brought his lube with him because after he fought with his jeans, he extracted the tiny container. “I brought the strawberry-scented one. I think you liked it.”

“Yes.” In truth, it could have smelled like paste and she’d be happy if it meant he’d impale her with his cock.

Clay knelt on the bed behind her and rubbed the sweet goo over her hole. She pressed her legs closer together and lowered her body to make the opening wider.

“Did I mention I love your ass? It’s so full and lush. You’re ripe for fucking.” He punctuated his comment with a groan.

When he leaned over and kissed each cheek, she moaned. “You do know how to sweet-talk a girl.”

Matt moved to the side, reached underneath her and plucked her nipples. They were already hard and sensitive. The added pressure swept pulses down her sides, building the tension in her body once more.

Clay dipped a finger into her forbidden hole. This time her tight muscles gave way and welcomed his attention. When he dragged his finger in circles, he hit spots that excited her.

“Wait until I pack you full of my cock. That will feel spectacular.” 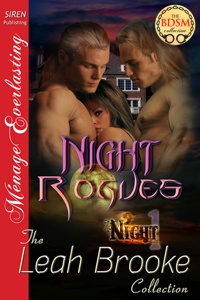