When forty-year-old Chicago podiatrist Matthew Pepper is approached in a bar by college student Ryan Meade, he figures hooking up with the handsome twenty-one-year-old might be just what he needs to help him get over his recent breakup.

But the hookup doesn’t go as planned and Matthew writes the evening off as a failed one-night-stand. Ryan, however, views things differently. To him, a failed hookup is nothing more than an opportunity to try again.

Ryan pursues Matthew, not just because he wants to be with the man, but because he wants something ... and he’s determined to get it. Will Matthew find out Ryan isn’t as transparent as he claims to be? Does Lyin’ Ryan live up to his nickname? 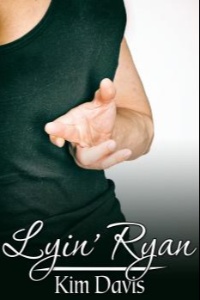 During the cab ride to my condo, I wondered if I’d made a mistake in inviting Ryan to my home. I didn’t know him and it had been a long time since I’d picked anyone up in a bar. What if we got to my condo and he demanded money for sex? I didn’t even have much cash on me. How much did male prostitutes charge these days? Fifty dollars for a blow job? A hundred for anal? More than that? I had no idea. Ryan rested his head on my shoulder and closed his eyes. Yes, he was young and cute, but that didn’t mean he wouldn’t beat the shit out of me, rob me, or even kill me. I didn’t know him. He was a stranger to me. He’s not a psychopath, I silently told myself. We’ll have a good time together. This one-night stand is just the thing I need to get myself out of the sexual slump I’ve been in since breaking up with Donovan. Taking Ryan home won’t be something I’ll regret in the morning. By the time the cab pulled up in front of my building, I’d convinced myself I was doing the right thing.

I lived in a one-bedroom, one-bath condo on the eleventh floor of a high rise in Chicago’s Streeterville neighborhood. It was an older building without a lot of the amenities that the newly constructed downtown condos had, but I’d gotten a good price for it and I liked it. Because I’d saved money on the purchase price, I was able to do extensive renovations, gutting the kitchen and bathroom to put in new marble countertops and updated fixtures, having new hardwood floors installed, and painting every room in warm, earthy colors. I had hoped Donovan and I would eventually buy a bigger, nicer place together, but every time I’d brought up the subject of cohabitation with him, he’d either give me some bullshit excuse about the time not being right or change the subject entirely.

“Thanks for inviting me here,” Ryan said as we walked into the living room.

Even though his joke was lame, I laughed anyway because it was funny. At least he had a sense of humor.

“Your place is nice,” he said, looking around the living and dining areas.

There was some small talk between us about the condo and I took Ryan out onto the balcony to check out the city view.

“Do you live here alone?” he asked as we looked out over the Chicago skyline.

Ryan looked like he wanted to ask another question but, thankfully, he didn’t. The last thing I wanted to do was talk about Donovan.

When Ryan and I returned to the living room, I turned to him and said, “Look, before this goes any further, I’m going to need to see some ID.”

“Yes. I just want to make sure you’re the consenting adult you say you are.”

“How young do you think I am?”

“I figure you must be at least twenty-one since we met in a bar, but I want confirmation.”

Ryan pulled his wallet from his back pocket and slid his driver’s license out. He handed it to me and I looked it over. He was indeed twenty-one and I was surprised to see that his license was from New York state and listed a Syracuse address. Maybe he really was a college student. I handed it back to him with a smile.

His face flushed as he stuffed his license back into his wallet. “Thanks.”

“How does it feel to finally be twenty-one?”

He smiled. “It feels great.”

I told him to have a seat and asked if he wanted something to drink.

“I’ll take a beer if you have one,” he said, sitting in one of the living room chairs.

While I was getting two cans of MGD from the fridge, I asked, “Shouldn’t you be spending your twenty-first birthday out somewhere getting drunk with your friends?”

“Probably, but I chose not to.”

When I returned to the living room, I handed Ryan a beer before asking, “Are you doing this for money?” As soon as the question was out of my mouth, I regretted speaking the words, but I couldn’t let things go any further until I knew the answer. I expected him to be insulted and angered by the question, but he wasn’t. Instead, he seemed to find it amusing and laughed.

“Wow,” he said, popping the beer can top before taking a swallow. “I don’t think I’ve ever been accused of being underage and a trick in the same night.”