Betrayed and distrustful, beautiful Philadelphian, Abby Moore sails to England, marriage the last thing on her mind. A decent match is not for her, not with her secret. Waiting for her half brother, the Earl of Carrington, she finds herself in a compromising situation. Despite the attraction she feels for the Earl of Lynbrook, she discovers herself with a marriage proposal she can’t accept. In fact, she’ll do about anything to get out of the match and she says so.

Bradford St. James, the Earl of Lynbrook, doesn’t want this marriage. Even when he hears Abby denounce him, honor says he must marry. Although she tempts him like no other woman he’s met, he’ll say his vows then hide her away at his northern estate. But when accidents threaten his life, he begins to wonder just what Abby is willing to do to get rid of him. 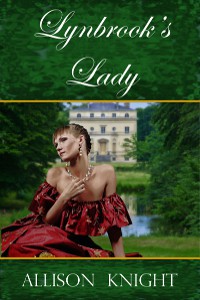 Before she could object, he drew her into his arms and brushed her lips with his. At first, she tensed, and, afraid she might pull away from him, Brad softened the kisses then gently traced the curve of her jaw, stroking her delicate satin skin while he pressed his lips to hers. The tension eased as he caressed her and, to his delight, she leaned toward him. Taking instant advantage, he gently drew her onto his lap. A faint hint of wild flowers teased him and he raised his head, breathing deeply of a fragrance uniquely hers. He placed another kiss on her lips, then another and another, each growing more intense, less guarded.

A sweet hint of brandy met his tongue, as he coaxed her mouth to open for him and, when she did, he teased the edges of her lips, as if begging admittance. He could feel what tension remained in her melting with his caresses, and he almost cried out in triumph. She was exactly the kind of sensual woman he most enjoyed.

At first, Abby had no time to protest the earl’s request for a kiss. Before she could dissuade him, his lips pressed hers.

The rush of sensation that engulfed her left her unable to deny him. An unusual throbbing pounded through her body, and she dissolved, losing any concern for where she was and with whom. Thought seemed impossible.

His tongue touched the edges of her lips and heat roared through her, leaving her chilled in its wake while her fingers and toes tingled with an excitement too foreign to name. Her arms became appendages that no longer obeyed her command and lifted to twist around his neck, pulling him closer still. Unable to stop herself, she leaned into his heat, heat that vanquished the trembling of her soul.

He lifted his head, and she stared up at him. Dazed, it took time before she realized what had happened. This Englishman had just given her her very first kiss.

And she loved it.