Christmas Eve is finally here and Nicholas Castillo’s staff has trimmed the trees and decked the halls for the Gala. All is in readiness and even Kathryn, the pilot who is responsible for ferrying in Madame’s Eve’s 1Night Stand guests to the remote hotel in Castle Alaska has hung up her wings for the holiday. Even better, she’s Nicholas’s date for the evening. Because she lost a bet. But he’ll take a date with her any way he can get it because Nick has hopes that the Christmas spirit will help him to win over the woman he’s longed and lusted for since the first time her plane touched down outside his hotel. If only she didn’t think of him as a friend. Kathryn wonders when Nick will take a hint. She’s even willing to put aside her comfy flying duds to don an elegant dress and stilettos for one night if it will make him notice that she’s a woman and hopefully attractive. But in the years they’ve known one another, she’s never had the nerve to tell him she’s interested, and why would a rich, handsome hotelier, a member of the Castillo family, be interested in a woman who rarely hangs around for more than a day or two before flying off to the wilds of Alaska’s interior. It will take a heaping dose of Christmas magic—or maybe Madame Eve’s own brand—to make this one work out! 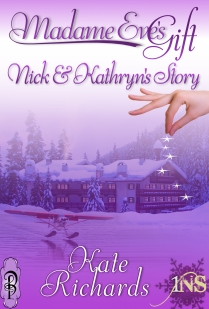 “Only because I lost a bet.” She tossed her head and her long braid bobbed over her shoulder, with a jingle. A tiny bell on the hair tie at the bottom twinkled in the light. Looked like she did have a little Christmas spirit. He stored the knowledge away in case he could use it to his advantage. He only hoped he wouldn’t mistake a friendly gesture for an opening and ruin what they did have. “And I suppose it includes wearing that dress I spotted in the closet.”

He stood back and watched as she left the room, her free stride making his heart lift. Beautiful, smart, and far too independent to want to settle down with a hotel manager, even if he was one of the very successful Castillos…a first cousin to Jackson and Jagger, raised in their home as a brother. His parents had insisted he have an American education and life, despite their own reluctance to leave Cuba. Funny he’d end up at the northernmost of the Castillo resorts—and every bit as much in love with its magnificent environs as his parents were with their island home.

But Kathryn was not impressed by status or money. She treated him as a friend and he tried hard to make that enough.

“Are you coming or what?” Her voice floated back to him and he shook himself and followed. No use fighting what couldn’t be changed; he would settle for watching his friend strut toward the elevator, her slim form and swaying hips making even her faded flying clothes sexy.

Did platonic buddies run their fingers through one another’s hair? Did they stroke long, silky waves back to press lips to the satin skin under their friend’s delicately curved ear? Will she wear her hair down tonight? His steps slowed as he came up behind her, hands clenched at his sides to keep from finding out what would happen if he grasped her waist and pulled her back against him.