Luke, an American exchange student studying abroad in Ireland, ignored his roommates when they told him to put back the gold coin he found in the garden. They warned him about what would happen if he kept the leprechaun gold. He might wonder if maybe he should have listened to them when a sexy, kilt-wearing leprechaun shows up that night to claim the last of the coins from his scattered pot of gold. 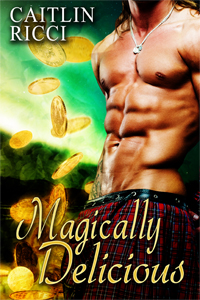 Luke carefully planted the last of the carrot seeds in the patch behind the little Irish cottage. He wiped his hands on his jeans and was about to stand up when the shine of metal caught his attention. Picking it up, he was surprised that it appeared to be a small metal coin, one that he’d never seen before. He walked back to the house with his head down, focused on the little treasure.

The gold object glinted at Luke as he bent over the small bathroom sink and began to work the dirt loose with his fingers. Since Luke was the only one of his roommates that used the garden, it was almost like the coin had been waiting for him. He liked to think that at least.

“Hey, mate, gonna be a min?” his roommate asked him, sticking his head inside the bathroom door. “Ah…whatcha got there?”

Luke blushed and ducked his head. Of his four roommates, Vic was the most obviously Irish of the bunch. And his accent always did things to Luke. He shifted against the pedestal sink, trying to hide the evidence from the other man as he came fully into the cramped bathroom with him. “Something I found out by the garden” Luke told him, holding it up to the light so the other man could see it as well. It was a strange sort of coin, well worn but without any indication of a country.

“Leprechaun” Vic declared, taking a step back so as not to touch the object. “Better put it back. They can get pretty mean when their treasures go missing.”

Luke laughed and shook his head. “Yeah, right. Another one of your silly-little-American tricks?”

But Vic wasn’t laughing as he stepped back out of the bathroom. “No, mate. You’re in Ireland now. We don’t laugh about the wee people. Best return it afore they notice.”

Luke watched him go with a breathy sigh. Damn. He had to get that shit under control if he was going to continue living in what amounted to an Irish frat house. He finished washing the coin in the cold water until it shined.

There was dirt under his nails that would need a good scrubbing, but there wasn’t much he could do about it as another roommate yelled out that it was time for lights out.

He’d have laughed and blown the guy off, but they all had classes in the morning and he wasn’t about to oversleep—again. He’d learned the hard way that Irish professors actually gave a damn about students interrupting their class by coming in late—unlike his professors back in Montana.

He entered his small bedroom, a luxury since it was private, and dropped the coin on the well-worn nightstand next to his mattress. He slipped out of his jeans, preferring to sleep naked, as he crawled between the sheets and pulled the thick comforter up to his ears. He wasn’t tired but he tried to force himself to go to sleep. He tried counting sheep, as there were plenty of them on all sides of the little cottage. It was Ireland after all, but the farmer who owned the land had moved them down the hill. After tossing and turning for a while, he managed to drift into an uneasy sleep.

Arn stepped onto the plane called Earth amidst a roll of thunder and a splash of rain. His kilt was sopping wet as he stomped over the uneven ground and around jutted outcroppings of rocks toward the little cottage down the hill. His coin had been found, the last of his pot that had been strewn across the green countryside more than a century before. And his blood pulsed with the need to get it back. He knew without question which of the darkened rooms held his coin and getting through the unlocked window was only a slight hindrance with his bulky muscles. He could have easily just gone through the stone walls, but the coin, it called to him to such an extent that he could think of little else and he didn’t want to risk getting stuck in the wall if he lost his concentration.

Hanging by a Moment (1Night Stand)
Bella Juarez
In Shelf
$2.99
Tweets by
sirenbookstrand