Though maintenance man Elliot has a list of work orders a mile long, he decides to knock out one of the easier jobs right before lunch -- an upper floor apartment has a leak in the A/C's condensation line. It'll take five minutes to blow through, then Elliott can take a break.

When he arrives at the apartment, he finds the female tenant in the shower. He debates coming back later, but he's already there and wants to get the job over with as soon as possible. He's halfway finished, too, when the bathroom door opens and there stands Donnie -- very wet, very naked, and definitely very male.

Suddenly Elliott wants to blow something other than an A/C line.

I noticed the bathroom door was shut. Light seeped under the crack along the floor. I closed the apartment door behind me -- didn’t want that supersonic cat making a break for it -- and crossed the short hall to the bathroom. I heard the rush of a shower running inside, and was the fan running, as well? A man’s voice sang out, some rap song I didn’t recognize. She probably had the radio on, too. No wonder she couldn’t hear me.

I debated waiting. I didn’t want to knock on the bathroom door and startle her -- what if the music playing came from an iPhone within reach on the corner of the sink, and she decided to call the police? What I should do, I reasoned, was knock off early for lunch and come back after I had something to eat. Give her time to get out of the shower and get dressed.

But I was already there, I’d dragged the shop vac upstairs, and it would take literally two minutes to clear the a/c line and vacuum up any condensation she’d heard dripping behind the panel. I could be done with it in no time. She’d never even know I’d been inside the apartment until she found the work order I left signed on her counter.

I’d work fast, I assured myself. And if I heard the shower cut off, I’d holler out again so she wouldn’t be surprised to find me in her apartment.

The air conditioning unit was in a maintenance closet inside the apartment’s utility room. I went inside, stepping around a pile of dirty laundry and the cat box on the floor, pulled the shop vac in after me, and shut the door for more room. When I opened the closet, though, I realized too late she used it for additional storage -- a broom, an old mop, and a snow shovel leaped out at me like some poorly constructed booby trap. I dodged them aside, catching the mop and broom handles, but the shovel was shorter and I winced as it clattered to the floor. Shit! Was she seriously not hearing this?

I strained to hear through the closed door and yep, the shower was still flowing in full force. All right, fine. I planned to be quick, didn’t I? And already I’d wasted a minute fiddling with broomsticks. I leaned the broom and mop against the side of the washing machine and got to work unscrewing the a/c unit vent. As I was on the last screw, I heard the a/c kick on and I could’ve groaned in frustration. Why hadn’t I cut that off?

It didn’t matter now. Plugging the shop vac into the outlet behind the washer, I leaned into the unit and blew out the line, then vacuumed up the condensation that had pooled on the floor. It was an awkward reach -- one of the cooling lines blocked my path, and my arms weren’t long enough to reach all the way inside the unit. The closet was too small to hold my bulk. Easier to go around the front of the unit and unscrew the vent in the hallway.

Which was just across from the bathroom door, now that I thought of it.

But I’d be done in a heartbeat. I’d get all the dripping water out of the a/c and the unit would be as good as new, until the line decided to block up again as they tended to.

So I turned off the vac, pausing a moment to listen for the sound of the shower. Yes, it was still running. Good. I pulled myself out of the cramped closet, unplugged the vac, screwed back on the vent cover, shoved everything that had fallen out of the closet back into it, and shut the door quickly before the broom and its friends could jump at me again. Then I opened the door to the utility room, took a step out into the hall, and came face to face with an incredibly sexy -- and incredibly naked -- wet man.

He rubbed a towel over the top of his head, letting his slim, toned body air dry. Shower spray beaded in the scant tufts of hair on his chest, glistened on his arms and legs. Water ran down chiseled muscles to the V of his crotch, where a fistful of black curls coiled above his heavy dick. I caught a glimpse of his face, nothing more, then couldn’t seem to tear my gaze away from that thick, ruddy, semi-erect cock.

Sweet Jesus. My day just got a whole hell of a lot better. 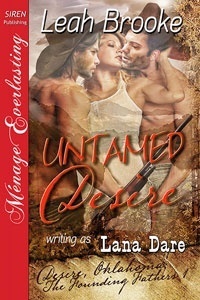