A writer, a musician, an unexpected love… and a killer who wants to destroy it all.

Abby never dreamed she'd meet her rock-n-roll fantasy, Seth Caldwell, by crushing his guitar under the wheels of her Jeep. Twice. Seth wants to strangle her, but soon the snarks turn to sparks, and he revokes his longstanding rule against getting involved with women on the road.

But when an attempt is made on Seth’s life, everyone’s a suspect. Abby’s determined to hang on to the tenuous ties they’ve developed, but Seth’s determined to keep her safe... even if he has to push her away in order to do it... 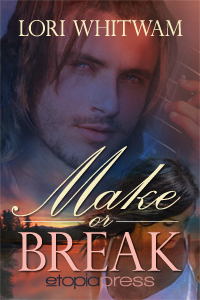 Entering town, she was so distracted she barely took note of the 1920s-era brick storefronts or the concrete planters overflowing with pansies courtesy of the Pioneer Garden Club. She decided before she went to see Monique, she would drive by Dash’s, the venue for the concert. Maybe she could get a glimpse of the band, and, if she were lucky, even Seth Caldwell, their lead singer and guitarist. But she had to hurry because Monique was expecting her.

On Buchanan Street, she spotted the tour bus parked on the left side in front of the club. She thought she could see figures moving around through the windshield and squinted, trying to determine who they might be.

Her attention focused on the bus, she suddenly caught something entering her frame of vision on the right. She only had an instant to register a man with familiar long, golden-brown hair stepping from in front of the equipment trailer she had failed to notice. An unformed expletive on her lips, and she slammed on her brakes as he leaped back, narrowly escaping impact with her Jeep.

The guitar case he was carrying, however, was not so fortunate. Abby’s fender caught it, ripping it from its owner’s hand, and it disappeared under her right front wheel with a nauseating crunch. Stunned, Abby tried to pull to the curb behind the trailer, but after throwing the Jeep into reverse she realized the flaw in her logic. Nope, definitely not one of her smoother moves. The guitar case, once again victim to her right front tire, reappeared after another small bump and an oddly lyrical grinding sound.

Abby maneuvered the Jeep into the general vicinity of the curb and hopped out, too shocked to know whether to throw herself to the pavement in remorse or run for her life. On unsteady legs, she made her way to the scene of the crime. Seth crouched at the edge of the street, picking through the shattered remains of what had recently been an acoustic guitar.

She dropped to her knees beside him. His hair fell forward, blocking her view of his face, but he pushed it back and turned to look at her. His blue eyes might as well have been laser beams, the way they bored into her. Was it possible to be simultaneously thrilled and terrified? Apparently so.

“You killed it,” Seth rasped. “You fucking killed my guitar.”

There was no way she could argue. She’d never seen a deader guitar. “I’m so sorry! I was looking at the bus and didn’t see you. I was irritated, and sort of distracted…”

“You were irritated? So you flew down the closest thing to a main street this town has, and ran over my 1997 Taylor Cujo, which I’ve had for not even three weeks?” Seth began scooping the remains of the instrument back into the mangled case, his gray T-shirt stretching across his shoulders with the effort. He somehow managed to maintain the full force of his glare the entire time.

Abby stretched out a hand to help, but Seth shifted his body to block her. “Don’t. You’ve done enough,” he snapped.

This did not strike Abby as a gracious acceptance of her apology. In fact, he was being kind of an ass. Her Irish temper began to kick in, which was something like the Hulk’s, but without the green skin and purple pants. “Look, it was an accident, OK? And what the hell are you doing stepping out into traffic anyway?” She stood and scowled back at the angry musician.

“Traffic? What traffic? About three cars drove by in the last twenty minutes.” Seth tried to close the lid on the case, failed, and shoved the whole thing toward the curb.

“Stop yelling at me!”

“You are definitely yelling.” She caught a glimpse of something at his neck and did a double take. “Are those ear buds? You were listening to music? That’s why you didn’t hear me!” Her voice rose about three octaves.

“I could hear fine. And it doesn’t have anything to do with your shitty driving.” He ripped off the buds and stuffed them in his pocket. The angry lowering of his brows lessened the impact of his glare, but not by much.

Abby shook her head, walked to the open door of her Jeep and grabbed a business card from her purse. “Here. Get your guitar fixed…”

“…or replaced, and send me the bill. And for the last time, stop yelling!”

“There are only a hundred and twenty-four of these guitars on the planet, and it took me six months to find this one. You think I can just replace it?” His voice, she noted, had a certain amount of anguish somewhere beneath the fury. Seth stood, and Abby tried not to flinch as he snatched the card from her hand.

“That’s the first smart thing you’ve said so far. Out of my sight is a real good place to be right now,” he spat.

Suppressing a shriek of frustration, Abby turned toward her Jeep and tossed back over her shoulder, “I can’t believe I finally meet you, and we end up squatting in the gutter yelling at each other.” She slammed the door and pulled away from the curb. Her last glimpse of Seth as she headed down the block showed him standing by the equipment trailer, eyes wide, and a puzzled expression on his face.