Bob Andolini heads down to Florida for Bike Week, but ends up ditching his biker buddies to see his daughter and ex-wife. Sandra says they need a new horse, one that can work with Megan's disability. But, for the first time in his life, Bob has some freedom. Freedom to ride his Harley on weekends, freedom from a wife and child, freedom from parenting. Then he sees Megan struggling in a local horse show and his feelings veer. Can he make the jump? 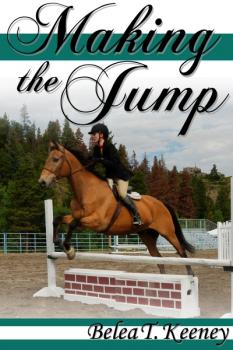 Bob wandered through the first barn, swinging wide around two horses with their heads out of their stalls. He kept his eyes roving, looking for Sandra’s bleached blonde mop on the adult women milling about. When he turned a corner, he heard a sharp “Hey!” and figured it wasn’t for him, kept moving, until someone snagged his arm. “Hey!”

He looked around, into the face of a woman his age, lines just starting around her eyes, her skin tanned.

“You can’t smoke back here. Didn’t you see the signs?”

“Oh, shit. I’m sorry.” He went to toss the cigarette down, and the woman looked like she was about to slap him.

“Here.” She pointed to a sand-filled bucket at the end of the aisle.

“You know why it’s dangerous, don’t you? Have you been around horses?”

“Yeah, I have actually. It’s just been a long time.” He put out his smoke. “Sorry, really.”

“Promise me you’ll be careful.” Her face softened.

“You don’t happen to know Megan Andolini, do you? Long brown hair?”

The woman cocked her head to one side. “Megan, Megan. Oh! Does she have ...” Her left hand fluttered over her right shoulder.

“I think I saw them in the practice ring.” She pointed to the left.

“Thanks.” His heart sped up a little. The last time he’d seen Megan was at Thanksgiving. She was a slender girl, straight up and down, her skin still the smooth pink of healthy childhood. Sandra had told him that she was a little worried; Megan hadn’t started her periods, all the other girls in her class were getting breasts and acne but Megan was still girlish.

“Does she want to start her periods?” Bob asked.

“Well, she’s asked about it a little but I don’t know. Thirteen is late.”

“Why would she want to? Isn’t it a pain all the way around?”

“It just means you’re starting to grow up. It’s womanly. I don’t expect you to understand.”

“Sandra, don’t push her. There’s nothing you can do about it anyway. Let her stay interested in horses. Christ.” Just what he needed. Boys after Megan.

He leaned on the rail of the practice ring. A hundred yards away, he saw a red pony that might be Rory, he couldn’t really remember even though he had a picture of Megan and Rory in his wallet. And all the girls had their hair up in those black helmets. A big brown swept in front of him, kicking up dirt, its thick tail swishing. Bob looked again for the pony and noticed its rider was too long-legged for him, the pony strained just to trot around the ring. They were ridiculous-looking, like a clown act in a circus. And then they made the curving corner, twenty yards away, and Bob saw the pinned sleeve on the girl’s right arm.

He stepped back quickly from the rail, feeling his chest prickle. He went under the barn’s overhang and watched his daughter from the shadows. She moved smoothly, balanced as she posted up and down, her left hand quiet on the rein, her right arm strapped and still. Bob noticed the difference between her and other riders; a few flapped their arms and legs, lurching in the saddle, kicking their heels with every stride. Megan’s legs were still, curled against Rory, her stirrups below his belly. Rory huffed by, his chest damp. His ears were up though, he looked happy.