Mandi and Winnie have always been in the in-crowd. The popularity they enjoyed in high school hasn’t diminished, and the two beautiful young women live a carefree life, thinking of nothing but clothes, parties, and sex. A hookup with an old friend after their class reunion gives them the idea of creating a sex club as a way of reconnecting with their former classmates. The two girls who were once at the summit of Woodside High School’s social hierarchy are now determined to break apart those old divisive cliques, and bring everyone together in a very intimate way. This time they’re making sure everyone is invited to the party. But how many of their old classmates will show up? 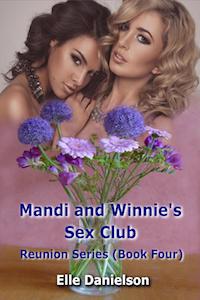 Winnie jumped into the water, with Mandi right behind her. Cedric hung back a little, worried his clothes might magically disappear if they were no longer in his sight. “Come on,” Winnie said, coaxing him to join her in the water.
Cedric couldn’t resist that invitation, and the three of them spent the next hour swimming and frolicking in the cold water. When the golden sun started to light up the eastern sky, they made their way back to the bank and put on their clothes. Cedric smiled, delighted to have a beautiful woman on either side of him. He put an arm around each of them, as they admired the view.
They sat in silence for several minutes before Winnie spoke. “Ten years is too long,” she said thoughtfully.
“For what?” asked Mandi.
“To wait for a moment like this. Not just for the three of us. For everyone we went to school with.”
“Agreed,” Cedric said. “But what do you want to do about it? Organize more frequent class reunions?”
“Not exactly,” Winnie replied.
“Not necessarily a reunion,” Mandi said. “But something like a reunion.”
“I know. A reunion has too many restrictions,” said Winnie. “We want something more organic.”
“More orgasmic,” Mandi suggested.
Cedric watched the two of them communicate like two hemispheres of a single brain, on the verge of a eureka moment.
“How about a sex club?” Winnie suggested. Turning to Mandi, she asked, “Does your dad have any commercial space he would rent us for a good price?”
“I’d have to fib about what we were using it for, but yeah. He’s got that building on Regent Street that used to be a restaurant. It’s been empty for almost a year. I’m sure we could use it once in a while until he finds someone to lease it. We could tell him it’s for children’s birthday parties or lesbian weddings or something.”
“Wait, are you two serious about this?” Cedric asked.
“Of course. Are you in?” Winnie asked.
“All the way,” he said grinning. If the two kinkiest girls from his graduating class were starting a sex club, he intended to become a charter member.