Daniel’s more scared of his feelings for Richard than being stranded on a tropical island.

When a business trip goes awry, it leaves Daniel and Richard stranded with more to contend with than just the problem of survival. What’s a man to do when he’s not sure whether to feel more frightened his feelings aren’t reciprocated than the threat of wild animals on the island?

He might get eaten ... but only if he’s extremely lucky.

His emotions somersaulted again. What did Richard expect? Not many employees were about to get naked in front of their boss, a man who had dragged him out of a safe environment into the wilderness and out of his comfort zone in so many other ways.

Damn. His hands shook as he fumbled to unfasten his trousers. In minutes, he’d be naked ... with Richard. He didn’t know whether having admired Richard and yearning to kiss him for so long made this worse, or better.

Kiss him? Daniel almost laughed. Oh, he dreamed of doing a number of things with him, to which kissing was only a prelude. What if he got in the water sporting a goddamned hard-on?

Silently Daniel commanded his prick behave. Of course, his dick acted like a traitorous bastard.

Get a move on. Take much longer and you will look ridiculous.

If he didn’t already. Richard had to sense he was taking more time than necessary. If he were going to this, he should get on with it. Stop stalling. Quit daydreaming.

Keeping his gaze averted, Daniel dropped his trousers and stepped out of them though he still wore underwear. He considered what Richard would think of him keeping his skivvies and knew the answer even before the thought fully formed. Whatever Richard’s intentions Daniel’s modesty reached new heights of absurdity.

Certain the other man’s gaze crawled over him, Daniel wanted to check. He couldn’t. He didn’t know what he feared more. Seeing what he wanted or not seeing it; he didn’t want to start trying to interpret whatever glinted in the depths of Richard’s eyes and getting it completely wrong.

Let him lead. Shit. Whatever Richard had in mind, Daniel wanted it. Had for a long time. So why was he dawdling? Sure, he had good reason to roll up his trousers to place his clothes beside Richard’s. He didn’t want to put his garments back on only to find some enormous spider had crawled into them. If anything was going to bite his nuts, he wanted it to be human. Still, he had no real excuse for the time taken. If Richard wanted -- Daniel swallowed and heard a gulp -- sex, why put off the inevitable?

Because he feared all this was down to his imagination, nothing more.

He finally risked a glance only to find Richard swimming, oblivious to Daniel’s turmoil. Well, if that didn’t beat all. Embarrassment and excitement wilted, leaving more than his ego deflated.

Richard was right about one thing -- he acted pubescent, just not in the sense Richard meant. So he was a victim of unrequited love. Grow up. Get over it. At least he wouldn’t have to worry about slipping in to join Richard sporting a hard-on.

Daniel stripped out of his underwear and, with one hand cupping his groin, he focused on the water, crouched at the pool’s edge, and stared down. His reflection was of a good-looking man with blue eyes. Daniel would hardly call himself conceited, but he was aware of his features. The sight of his blond hair sticking up at all angles made him flinch. Day-old hair gel didn’t go well with tropical heat. What did he look like? He certainly didn’t carry off the wild mien as well as Richard did.

Looking up, he caught sight of Richard’s dark eyes watching him, became immediately aware of his nudity again, and of holding his genitals in one hand.

At once, he wanted to dive in, but Richard’s gaze held him pinned. A hot flush engulfed him, leaving him abashed by nudity in a way he never had before in the presence of another man. He shouldn’t care, but he did. He also felt bloody foolish. Richard had caught him gazing at his own reflection and handling his jewels. Could the day get any worse? Of course, it could. 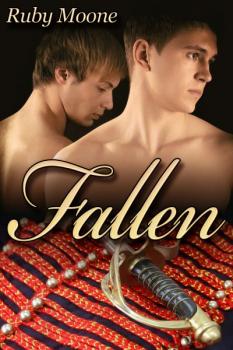