Sixteen-year-old Cee has a hopeless crush on her best friend Marcus. Unfortunately for her, he’s gay. In the wake of Marcus’s older brother leaving home to join the Aerie, Marcus has become increasingly distant. When Cee discovers she has a troublesome dragon named Livian living inside her things grow even more complicated.

Marcus urges Cee to go to the Magi to have Livian removed, but the more Cee becomes attached to Livian, the more she questions the decision. Should she change her natural self for the crush who will never love her anyway? 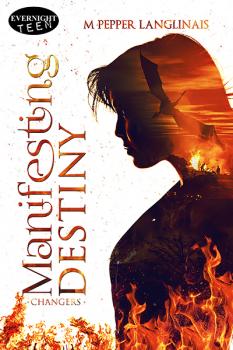 Heat spread through her. Cee’s face elongated, her arms extended, her nails formed into claws, and her feet became suddenly very heavy. The bony spires erupted from her shoulders, and Cee was compelled to double over to allow the wings to grow.

Throughout, Cee fought the urge to resist, though her instinct was to do just that. She wondered what she looked like, caught a glimpse of red scales, and realized her eyesight had become sharper. All the details of the trees around her impressed themselves upon her brain: the cracks and flakes in the bark, the saw-tooth edges of the leaves, and every little spot and insect thereupon.

How big was she? Cee realized she was at eye level with the middle of the trees. She looked down and saw her friends pushing themselves even harder against the trunks, making way for Cee’s—or Livian’s, she supposed—tail as it snaked by.

The massive wings began to move, slowly at first, gathering speed that put the force of the helicopter’s artificial wind to shame. Cee realized she had no control over what was happening. It was all Livian, and she was housed inside him, somehow, along for the ride.

It was equal parts thrilling and petrifying, bursting through the treetops and being free of gravity. Cee would have liked to spend more time experiencing it, but there was the helicopter, like a massive black bug, and Livian went right for it.