Marianne! Journey Round a Golden Sun

Marianne and Simon have been more than friends since they were kids, but when she meets Mark, her whole life changes. It's not easy being spanked when you're not used to it, but although the two men in her life are rivals, the one thing they firmly agree on is Marianne needs her wild side tamed. Once she's had a taste of that kind of life, she's not sure she wants to argue. She loves them both, but Mark is not the kind of man to share. When he breaks the triangle, he makes her choose, at a cost to everyone. Can Sophie, the quiet girl who accepts Simon's discipline with absolute humility and never one word of complaint, save the day? She isn't beautiful and dazzling like Marianne, and the special qualities she has aren't on the surface, but her love for Simon goes past all limits. Shy and gentle though she is, perhaps Sophie's resolve to heal two broken hearts will prove to be more powerful than all Mark's dominance and strength 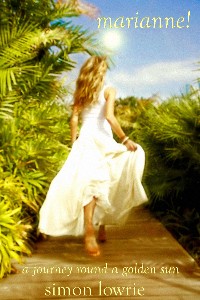 Marianne! Journey Round a Golden Sun

"...the long and short of it is that I was simply blown away by this tale of dominance and submission. It was told in style and with a very understated grace that made this book a winner with me."

"The overall storyline flowed really well, and while I may not understand the whole concept of D/s lifestyles it did open my eyes quite a bit with this tantalizing tale."

"Author Simon Lowrie has a way of making the oddest of characters likeable and believable. Marianne! definitely goes on this reader’s recommended reading list for being extremely original and one of a kind."

“I’m leaving him this time Simon – I really am.”

I looked at Marianne in horror as she stood bedraggled at my door. At the black eye the bastard had given her. At the tears and mascara streaming down her face, curdling with the rain. It was over two miles from her place to mine and she had walked without a coat.

“In that case darling, come in and start doing your cold turkey.”

I ushered her in, helped her out of most of her clothes, and dried her off with a towel. Our relationship being what it was, she kept her bra and knickers on while I used a hairdryer on them to melt away the damp. I turned the heating on full, and brought her one of my shirts and a jumper. She made them look magical. If I’d brought her a potato sack she'd have made that look good too. She was that sort of girl.

She and Craig had been on fire the past eight months. Some affairs are so wild and uncontrolled that excess steam and lava eventually block the channels through which the love can flow, and make it all explode. Putting it another way, the two of them had conspired in one of those acts of mutual madness most of us will never know.

But that night there was only the pain on view, not the dizzying glory. The bruises on her arms and thighs were, she assured me, matched as well as she could manage by deep scratches on his face.

“My pleasure,” she replied.

I didn’t expect her decision to return to this cold planet to last more than a day or two. After all, none of her previous resolutions had ever done so. But, using me and all her other friends as a crutch, this time she somehow held on through the agony. I have never watched cold turkey before, and hope I never do again. Drugs, alcohol, love – they writhe in the blood like howling medieval demons, desperate not to be cast out. Poor Marianne was eating the walls out of her need for Craig. He might be a thug and a bully, but he was also every colour of her rainbow. She had lost the fabulous sex, the thrilling nights out, the aura of his money and career, the sense that life was an adventure not a chore. Instead of dancing perilously on the top of his volcano, she was now sitting cross-legged in a mudflat looking at the pond life.

One night, a few weeks later, she made an observation: “So at least I don’t get hit anymore. Whay. Whoopee. Let’s all light the fireworks and clap our hands together.”

The caustic burn in her voice was clear. Without the urgent application of handcuffs and a straitjacket she might easily reach out for the phone and undo everything. I phrased an answer with my usual charm, but in effect I told her to put a sock in it and keep eating the turkey sandwiches.

If there were words to describe how intoxicating Marianne was, how bewitching and beguiling and impossible, then I’d use them. But there aren’t, so I’ll just say she was a woman. Suitors came, panting with excitement, and suitors left, sadder and wiser. A couple of them were even lucky enough to chalk up a one-night stand, and I bet they didn’t forget the taste and touch of her too quickly. A few months later still, she even saw the same bloke twice, and then three times, until it developed into a pallid affair of sorts.

“Yeah, he’s nice. He’s sweet. He’s funny and considerate and kind and all the rest of it. I really like being with him, but compared to what I had with Craig, it’s nothing Simon, it's absolutely nothing…”

She and Mr Nice kept adding damp kindling to the fire for weeks, but it never lit the sky and burned her house down like she wanted. And much the same happened with another few guys in the year that followed.

“Hey? What kind of Princess are you?” I asked her one night. “You don’t like the ogre and you don’t like Prince Charming. Get out of this fairy story at once and make room for someone else.”

She laughed, but she still hit me.

Then one day she rang my doorbell and I could tell at once something had happened. Her pupils were all big and shiny, and the smile she was wearing just shouldn’t be allowed out – way too naughty, too happy and excited. And as for that magnetic shimmer of hers, which normally only radiated about ten feet from her body, it was more than any man who couldn’t make love to her should have to bear. But as ever, I was the lucky victim of her beauty.

Of course I knew she must have met a man, so I duly waited to be rocked back on my heels by this astounding news. Marianne always had a sense of drama about her, and before she spilled a single bean, she insisted I fetch her the exact same shirt I had given her that wet and dreadful night some eighteen months before. She also wanted the same CD playing in the background. And so, to the theme of Roxy Music’s dance away she slowly dance-peeled to her bra and panties, superslow and superslinky, before putting on my shirt for the second time in her life. This time she was twenty-three, and managed the unthinkable by being even lovelier.

“He’s called Mark,” she said smiling, knowing that I already knew everything. Well, everything except his name and who he was and what he was like.

“And is he the ogre or Prince Charming?”