Marla, a beautiful fairy-like creature of great magic, must find and mate with the lost Elf King living among humans in order to fulfill an ancient prophecy and erase the cruel fate which has befallen her. 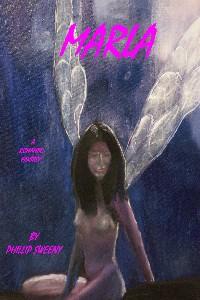 "You may stand at ease," Admiral Billings ordered, while he paced back and forth in front of Richard and Sarah, his hands clasped behind his back.  The room had been emptied of all except the three of them.

It took a long four minutes of pacing and glaring for him to calm down enough and stand in front of them.  "Now, tell me what the Hell is going on?  You two had better come up with some good answers and come up with them fast!"

He turned his attention to Sarah so he could question her first.  He tried to remain calm, standing in front of her, his hands on his hips, staring into her eyes, but unable to keep his eyes from drifting to stare at her exposed breasts and firm nipples, which jiggled with each deep panting breath she took.

He would have looked more astonished if he could have seen Marla smile, invisible from her perch on Sarah's shoulder. Instead, he averted his eyes and shook his head in disbelief and resumed stalking in slow measured steps around his two favorite pilots, as if he were inspecting a batch of new recruits, stopping one more time in front of Sarah to wrinkle his nose, inhaling in disgust.

"Major, have you pissed in your pants?" He stared at the tuft of blonde pubic hair, clearly visible as she stood with her hands clasped behind her back and her legs spread in a strained position of 'at ease'.  "I can smell it.  And, if I remember correctly, undergarments are regulation.  Where are yours?"

"Yes Sir! I peed myself!" She uttered the first words she had spoken since the landing, her answer crisp as she snapped to attention, saluting as if she were still in basic training.  Her left hand drifted down in a feeble attempt to cover her blonde triangle.

"And Major Thomas, what have you done?" Billings continued, not returning the salute, dismissing Sarah's response and leaving her standing at attention with her hand to her forehead, her legs together and her pubic hair half covered.  He walked around them several more times, stopping in front of Richard and taking several sniffs like he smelled rotten garbage.

"Nothing, Sir!" Richard responded by snapping to attention.

"Major, this is not the time to try to hide something.  I'm a man and I know what I smell on you and I bet it is not because you've been eating Brie cheese."

"You're right," Billings barked the words into his face, cutting short his attempt at an explanation.  I wouldn't believe anything you might try to come up with to fabricate as an answer.  Especially, since it looks and smells like you two have been having radio sex at MACH I.  I know there's talk about your relationship.  It's all over this ship.  You two have been 'the hot item of the week' for months.   I could Court Marshal you for this, but I trained both of you, and believe it or not, I'm very fond of both of you."

His voice softened a moment.  "I heard everything you said up there about the sighting, though I'm inclined not to believe you encountered a UFO, but I can't explain the landing you just made, either.  And, if it were not for that landing, I would throw you to the sharks.  I will try, however, to believe more of it than you think I will.  You are my best and brightest pilots.  Now spill it!  And one more thing, Major Wilson!"

"Stop saluting and zip your flight suit.  I've seen more of you than I care to see at the moment."

"Yes Sir!  Damn!" Sarah grimaced as she hastily zipped the flight suit, catching several pubic hairs and extracting them in one swift motion.

"Serves you right!"  Billings turned, shook his head and continued.  "This better be a good story."

The debriefing took thirty minutes before Billings nodded his head and raised his hand, interrupting Sarah as she described the landing.  "Enough.  I've heard enough.  I know what happened after the landing.  I want you two to go clean up and not mention any of this to anyone.  Some of it will be all over the ship.  That can't be helped.  Don't answer any questions."

Billings blinked his eyes and rubbed them with his fists as he watched Sarah and Richard walk down the passageway. "Damn!" Billings took a step forward and cocked his head.  "Now they've got me seeing things.  I thought I saw a blue light glow and follow them out of the door."