‘MATCHED WITH THE SHEIKH 2’ is the latest release from international bestselling author Alex Anders and is for those who love short stories where full-figured women, not only get their gorgeous guys, but are dominated by an alpha male.

A Sheikh has his secrets. That was something that Carla Westmoreland hadn’t considered when she signed her 6-month contract to be a Sheikh’s companion. Why exactly had the Sheikh chosen a full-figured girl like her? And now that she was 10,000 miles from home, could she change her mind? Would she want to?

Certainly, the sex was good. Scratch that, the sex was fantastic. The powerfully dominant Sheikh toyed with her body lifting it to the heights of ecstasy. That was great, but with each passing day, Carla desired more.

The green-eyed maiden entered her life as mysteriously as a desert flower changing Carla’s world forever. The maiden’s young exotic body was the opposite of her own. And Carla found the girl’s naiveté almost as beautiful as her looks. Appearing after each of Carla’s nights with the Sheikh, she came to think of the girl as her secret companion. However, nothing in a Sheikh’s palace is what it seems.

Entangling everyone’s secrets with those of her own, Carla must figure out a way out of the Sheikh’s bed and into his heart. Can she do it? Is it even possible considering what she has learned? For Carla to win her soul mate, she would have to find out. 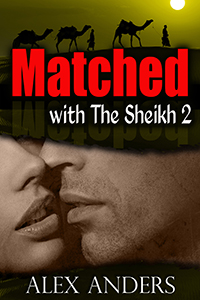 Kneeling next to her on the mattress, he placed both hands on her shoulders and slid them down. They rubbed her quailing bosom and her stomach until he reached her navel.

“Oh!” she moaned, lifting her ass. His hands never touched the throbbing depraved pu**y. Instead, they caressed her thighs to make her writhe in gluttonous craving. More gold silk was tied around one ankle and he tugged at it, tying it to the footboard.

Breathing hard, she watched in disbelief as he tied her until she was sprawled on her back with her arms and legs wide apart. She was bound to utter immobility.

The Sheikh was expressionless and his jaw was clenched. Carla panted as he abandoned her again to walk to the closet. When he returned this time, he held several toys. Throwing them beside her on the bed, he flung off his long Arabic robe.

“Oh, my God!” Carla shuddered in consuming awe as she witnessed her Sheikh in his full glory. His c*ck was standing upright, pointing toward her.

Carla squirmed and he kneeled between her legs, bending over to blow softly on her wet pu**y. His mouth was so close. It sent sparks of intense longing through her blood.

“What are you thinking?” he whispered. Untying the cord around her hips, he freed the barely-there panties. They fell away from his fingers and off her body, and his thumb pressed forcefully onto her cl*t.

“Uhh!” Carla could only reply. 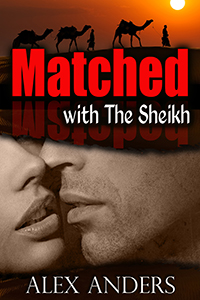