When Kimmy is invited to Q Con as a visiting author, she isn't surprised to find Darryl’s there, as well. But her interactions with him online don't prepare her for meeting him in person. He’s handsome and hot as hell, and has his sexy husband Scott in tow.

“So he’s bi,” Kimmy said. “That doesn’t mean you’re okay with him being in love with both you and me. And he doesn’t even know me. We just met.”

“You’ve been talking online for how long?” Scott asked. “Longer than I’ve known him. He knows your mind, your writing. The real you. Which is why you’re sort of his ... how do I put this? Have you ever heard the term free pass before?”

Kimmy stared at him for a long moment. She knew what the words meant, who wouldn’t? But she couldn’t figure out how they pertained to her. “Free pass for what?”

“Like a celebrity free pass,” Scott tried to explain. “You know, say you’re in a committed relationship, but you and your partner have this deal where if you ever get the opportunity to hook up with the celebrity of your dreams, no questions asked, then your partner can’t hold it against you and it won’t count as cheating because you’ve already established ahead of time that that celebrity is your free pass.”

Kimmy narrowed her eyes as she tried to work through the meaning behind his words. Speaking slowly, she asked again, “To do what?”

Scott’s eyes widened and he lowered his voice. “To sleep with them one time, no strings attached. You have one magical night, the celebrity goes back to his or her glamorous life, and your partner can’t be mad because it’s a free pass. You two already agreed on it. One and done.”

“One and done.” Slowly she shook her head. “And you two have picked out celebrities already? On the off-chance you meet them somewhere and they want to fuck you?”

Do you hear yourself when you talk? Kimmy wondered. Instead, against her better judgement, she found herself asking, “Who’d you pick?”

Scott laughed. “Same guy, actually. So if Robert Downey Jr.’s ever in town, he can take us one at a time or both together, doesn’t matter which. Because Darryl and I have the same celebrity crush. Well, guy crush for him. Because he’s bi, he also has a woman picked out.”

“That hardly seems fair.” Kimmy felt her tummy flutter nervously; she thought she knew where this was headed. “I mean, to you. Don’t tell me it’s me.”

She took an unsteady breath. “I’m hardly a celebrity.”

“You can say that about a lot of people these days,” Scott countered. Then his gaze shifted beyond her and his smile widened. “Hey, babe. What took you so long?”

Darryl trailed a hand over Kimmy’s shoulder, a barely there touch that was gone before she could react to it. Then he slid easily into the booth across from her. Was it her imagination, or had he grown more attractive since she’d seen him last? Was he really interested in sleeping with her? Did he love her stories, her writing, her mind, so much that he wanted a chance to love her body, as well?

And am I seriously considering this? 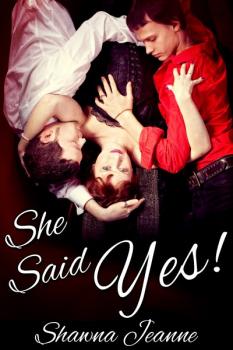 Lady from Boston (MMF)
Jovana
In Shelf
$3.99
Tweets by
sirenbookstrand