To what lengths will a young English professor go to find Mr. Right?

Stuck in a small college town with few prospects, Natalie turns to technology where she meets the most interesting, understanding, attentive, and über-sexy man—at least in his profile picture. She just knows it has to be fate.

It’s online dating at its best.

Scott Bailey was thrilled with his online enjoyment—Natalie was everything he had ever wanted plus some. She understands him. But her surprise visit to his retreat in the quaint village at Black Mountain, Missouri, has him concerned.

Is he really the bad guy her mother had always warned her about? Or is his bark worse than his bite? 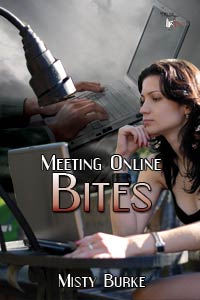 It was almost midnight when Natalie stepped off the little plane. With only two terminals, a closed café, and a pitiful looking souvenir shop, the Black Mountain airport was quaint at best. I don’t think he’s going to buy the “just passing through” story.

She wheeled her suitcase over to a ticket counter and rang the bell. An older man with thick spectacles came out of the back. “Good evening, ma’am. Are you coming or going?”

“I just arrived.” She lifted up her laptop bag. “I was wondering if the airport has Wi-Fi?”

“No, darlin’, the café has been closed for hours. I can tell you right now, they only serve homestyle cookin'.”

“Okay… Thanks.” Natalie had assumed that Black Mountain, Missouri, was something it obviously wasn’t. She had come here thinking it was a trendy little town off a bigger city. Scott’s profile had said that he was a computer programmer, for goodness sake. Wouldn’t that mean someone around here used the Internet?

She walked over to a row of rocking chairs and took out her Smartphone. At least I can still send him an email. Deciding to abandon the “passing through” idea, Natalie wrote, “Wanted to surprise you. Flew into the Black Mtn. Airport.”

Minutes passed with no response. She got up to explore the souvenir shop that boasted mediocre-looking T-shirts and a few stuffed animals, but the person behind the register told her that they would be closing.

“Should I call you a taxi?” The elderly man from the ticket counter picked up a phone and waved it in the air.

Natalie shook her head and got reacquainted with her chosen rocking chair. It was more comfortable than she wanted to admit, and the idea of a quick nap held some promise. She could always try to get in touch with Scott again in an hour or two. Her eyes drifted shut as the ticket counter employee placed a blanket over her.

Natalie jumped awake and looked up into the most intoxicating, brownish-yellow eyes. “Scott.” She sat up and casually tried to let her hair out of its makeshift bun.

“You shouldn’t have come.” He crossed his arms and scowled.

“I thought … we were hitting it off so well online that—”

With no warning, he pulled her out of the chair and dragged her over to a dark corner. “I’m the bad guy your mother warned you about.” He pushed her against the wall and invaded her personal space. “We were so good for one another when I wasn’t allowed to—”

“Kiss me.” The words came out of her mouth before she could really think. This huge, muscular man had her pinned, and the only thing her body wanted was more.