Bitter and lonely, Jack Frost wishes for a special holiday - one filled with family and friends, but it was impossible. His usual solitary travels leave him wandering from window to window, watching happy folks celebrate the holiday season, which only hardens his resolve, until he spots a car slide off the road into a ditch.

He goes to inspect the damage—only to find a miracle.

Rory sees him while no one else can and her warmth immediately starts to melt the ice within him. As she grants him his wish, he realizes he is keeping her from her own true Christmas. Can he let her go or would he be willing to give up his old life…forever? 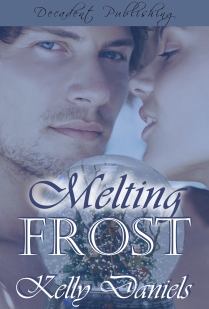 The air howled around him as he rode the northern wind through the crystal clear night sky. The holidays were approaching, and he was becoming more and more bitter with each passing day.

Jack dove toward the Earth as the twinkling city lights below him rivaled the stars and drew his curiosity. Swirling past window after window, he watched families prepare for Christmas. He imagined sitting by the fire, sipping hot chocolate and reading holiday stories with them, but his presence quickly created intricate frost patterns that raced across the glass panes and obscured his view.

His isolation gnawed at him. During this time of year, as the days grew shorter and the nights longer, he had nothing but the endless cold and silence—only the occasional howling winds to keep him company.

Shooting towards the twinkling lights of the heavens, he wished for the same thing he did every Christmas: someone to spend it with. A shooting star streaked across the sky and over the horizon, drawing his attention back to the land below.

He watched as a car spun on ice like a child’s Hanukkah dreidel. He’d witnessed such accidents on many occasions, especially during the long winter months, but this time something was different. An unseen force pulled him toward the car as it came to a violent stop at the base of a clump of trees. The branches of the towering pines practically covered the small sedan, and all that was visible were the glowing red tail lights.

Creeping slowly on the breeze, he approached the trees and inspected the damage. The front of the vehicle was crumpled from the impact, but the metal cage of the car looked to be mostly intact. He swept aside the undergrowth and gazed into the car window. All he could see were auburn curls sprawled against the white airbag. He watched as the woman’s head rolled toward the glass and dark eyes blinked at him, seeming to meet his invisible ones. A shot of warmth passed through him, like she’d peered right into his soul, before they closed again in unconsciousness.

Had she really seen him?