The Fine Art of Reading Riley: While out shopping on a winter's day, Stone Daye bumps into Cameron Phillips, an old friend and former lover who now works as an administrator at a local college. The two have a heated and romantic history, and seeing Cameron again brings it all back for Stone. Old feelings are stirred up again, but are the fiery embers of their previous relationship strong enough to ignite a new romance together?

Mr. Hideaway: In spring, Josh Hideaway is taking a much-needed break at his family’s cabin, where he meets ranger Zeth Mandell, his neighbor by the lake. A pack of dangerous coyotes brings Josh to Zeth’s rescue. Will something more than friendship blossom between the elusive Mr. Hideaway and the ranger? Sometimes hiding out is the only way to fall in love.

Autumn Cliche: When writer Chad Best heads to Haven Island to interview the famous Finn O’Rourke, he learns there’s a softer side to the reclusive artist. To Chad’s surprise, Finn woos and seduces him. When his visit comes to an end, will Chad choose to return to his busy life, or stay on the artist’s island with a man he might love?

20 Days of Tuck: During twenty days of a particularly hot summer on the shores of Lake Erie, Micah and Tuck fall head over heels in love. A year later, life has unexpectedly changed for Micah. He meets and falls hard for Carl, a witty, romantic guy along the lake. What will Micah do when various ties between his twenty days with Tuck and his current days with Carl begin to unravel? 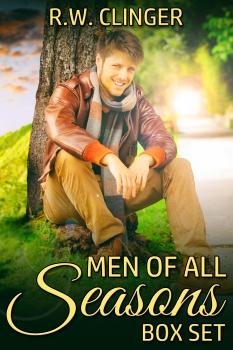 I worked throughout the morning, tedious with my labor. Tuck texted me during the passing hours as I crafted my critiques. During one of those personalized texts, he reminded me of his evening’s piano solo performance at Jayne Hall, Bach pieces mixed with contemporary artists’ pop hits, and that he had hoped I would attend. I told him during a brief call, “I wouldn’t miss it. Thanks for inviting me.” One text asked him if he would have an afternoon delight with me in my attic room, but he politely declined, claiming he had to practice for that evening’s performance, which I completely understood. Another text said, I love you, Mr. Martini. Play hard tonight.

Jayne Hall was five stories high, a city block long, and looked like a government building with its red bricks and double-paned windows. There was nothing elegant or charming about the place by looking at its exterior, but its interior was stunning and quite dazzling. Similar to the Rothshire House, its floors were an Italian marble, chandeliers were crystal, and alabaster statues lined the walls. Often used as a ballroom for uppity dinner parties and various functions of the well-to-do, it was now a vestibule for music. The floor was filled with nine rows of foldable chairs that were covered in satin. Each row sat twelve guests. At the front of the collected chairs was a Louis XV Steinway grand piano, which was shiny and a cinnamon brown hue. Next to the piano was a long-stemmed microphone on what looked like a flamingo’s leg.

What I remember about that evening after arriving at the hall: Some professor from Anders College started to hit on me, sitting to my right. The fifty-plus man touched my right knee and worked his hand up and along my inner thigh. I pushed it away and told him to be nice. Perhaps upset with me, unsettled by my discomfort, he leaned into my ear and whispered, “Young and officious,” which caused me to ignore him for the rest of the evening, concentrating on Tuck and his piano playing.

Again, my ears came alive and my brain was on overdrive, loving the music and Tuck’s performance, mesmerized and indulging in my intimate night with Tuck, perhaps even falling in love with him even more, if that was possible.

After his performance, an hour of mingling with the guests transpired. Red-eyed, hungry, dry-mouthed, and coming down from my high, tucked at Tuck’s side, I was introduced to two painters, politicians, military men with virtuous credentials, and a variety of other important people of the community. Hands were busy in uncomfortable shakes. Heads nodded. Backs were patted. Fake laughs were shared. The hour was quick, boring, and nothing that honestly interested in me, except for being at my lover's side.

As the crowd emptied from Jayne Hall, Tuck pulled me against him, licked the splay of my neck, and groaned into my ear, practically nibbling on its lobe, “I want you here and now.”

Before I had the opportunity to respond I was whisked down a narrow hallway at the rear of the hall, Tuck pushed my back against the brick wall, and my bowtie was removed. And there, pressed against the wall, manipulated by his mouth and hands, I was sexually taken advantage of, devoured by his pent lust, and under his desirous and relentless hex.

It was the best time of my life. I knew that, and wouldn’t have changed any of it. The right guy had come along in my lakeside world and had picked me out of the crowd of many. Tucker Martini had become my lover and someone I knew that was permanent, partnered to. I wasn’t about to give him up, or away, anytime soon. Not that night, or the nights that followed. The pianist was mine, every part of the man, which including his heart and soul, and whatever else I could have from him. We were meant to be together as friends and lovers, and any other label that described our closeness.

Love blinded us from the dangerous accidents of the world.

If I only knew that then.