Tammy Palmer can barely control her uniform fetish when she walks by Station 23. The four firefighters she fantasizes over are pure sex and muscle. But Tammy's not ready for love after her last disastrous relationship, not to mention she's not even in the same league as these delicious men.

When the newspaper she edits for gives her the chance for a promotion from pushing pencils, she jumps at the opportunity. The only problem is she's expected to spend two weeks at the new fire station in preparation for the article.

Tammy's wanton desires are soon unleashed when she moves into the station. But good things rarely last, and Tammy's crazed ex returns, luring the men away from the station. He's determined to get her back at any cost.

Will the men of Station 23 be able to save the woman they've grown to love in time?

Heat Rating: Sextreme
Word Count: 36,155
29 Ratings (4.2)
Contemporary Menage a Trois/Quatre
In Bookshelf
In Cart
In Wish List
Available formats
Mobi
HTML
ePub
PDF
Cover Art by Jinger Heaston
Reviews
This was a good book and I will probably read it again and again! LOL
rhondavb
This gals fantasy come true with four hot firemen. I loved everything about this truely amazing book. Keep them coming *winks* with a big YEA HAW from this gal.
Barefoot Okie
Read more...
Professional Reviews

5 FALLEN ANGELS: "Tammy Palmer has a uniform fetish, a fetish that she indulges daily with walks by the station. Then she finds out that she will be writing an article about the men of Station 23. She is excited until she realizes she will have to spend two weeks living with the firemen of her fantasies. She soon finds that the men are just as attracted to her as she is to them. They can only fight the attraction for so long before passion explodes. The feelings quickly grow and before long, the men realize they are in love. But there is an arsonist on the loose. Things get dangerous and suddenly her ex makes an appearance. When he lures the men away from the station, will they be able to save Tammy in time? This book is the first in a new series, Uniform Fetish, by Ms. Espino. It starts out with a newspaper editor and four HOT firemen. I jumped at the chance to review this book because who doesn't love a man in (or out) of uniform? I know I do, and the idea of reading a book about four hotties was definitely intriguing. That's right, I said four. This book is a ménage a Quatre. I have only read a couple before and was unsure how I would like this one. I discovered something. Four is not too many for me to enjoy reading about. Ms. Espino did a fantastic job of illustrating each man's very different and distinct personality. I fell for each guy at least a little. The chemistry between Tammy and her men was so hot I had to resort to fanning myself several times. Of course, there is also the added bonus of a little intrigue. Tammy has a stalker who she thinks has gone away, but hasn't. When he begins to threaten her again, she risks her life to save her men. That was the moment for me when I knew that she truly loved them whether she wanted to admit it to herself or not. The truth is the romance between Tammy and her four men is nuanced and fraught with emotion. Ms. Espino excels at drawing the reader in and making them feel the emotion. This is why I love reading her books so much. I am eagerly looking forward to the next installment in the Uniform Fetish series!" -- Ursula, Fallen Angel Reviews

“Should I get the jaws of life?” asked Jake. What the hell did that entail?

“Not today. We have two weeks with our little wildcat,” said Aaron as he trailed a finger along her inner thigh. She glanced to his side and saw Conall’s erection with her own eyes. The man was hung like a horse, his cock thick and virile. He slowly stroked himself which somehow made her more anxious to continue this sex party. “Are you ready for me?”

She nodded, parting her legs. He didn’t dash to fuck her like Conall had. He moved with the grace of a panther, tracing her curves with a narrowed gaze. Once close enough, Aaron lowered his head and latched onto her breast. She wasn’t expecting his hot, wet mouth to seek out her nipple. It felt exquisite as he tugged on her sensitive flesh. So much attention. So many men.

“Wait ’til you see what we have in store for you, sweet thing. We’ve been dreaming about this day for months but never expected it to happen.” Aaron sounded like her. The men of Station 23 were her fantasy turned reality.

He unzipped his pants and tugged her to the edge of the platform. Darius was standing next to him. Two solid bodies ready to claim her. “If you want us to stop, just say the word,” said Darius, staring her in the eyes. When she said nothing, he gripped the back of her head, his fist clenching a handful of hair. He brought her face forward and kissed her hard on the mouth. At the same time she felt the broad head of Aaron’s cock begin to penetrate her slit. She didn’t know where to focus, her body alight with heat and fire.

“She’s perfect.” Conall’s deep voice was so close, she imagined his hands could be on her, too. She felt rough hands on her tits, her hips, her thighs. There was a mix of pleasure and pain as she was fucked and fondled like never before. She didn’t even try to open her eyes now, too lost, floating on a virtual cloud of sensation.

Before she could even focus on what they were doing, she was lifted off the truck, Aaron’s stiff cock still fully penetrating her as he supported her around the hips. She held his shoulders and kept her legs wrapped around him to keep from falling.

She dared to peek open her eyes. Her cunt was only a breath away from erupting, her orgasm balancing on a precipice. She wanted to live in the sweet zone, the delicious realm of preorgasmic bliss. If she gazed upon her gorgeous men, it would be enough to push her over the edge. Jake’s beautiful green eyes stared back at her, intense and unreadable. She reached for him but he stayed inconveniently out of her grasp.

“Have you ever taken two men, Tammy?” asked Conall. His voice sounded drunk on sex, low and gruff.

“No,” she said quickly. This wasn’t something she did every day. It was completely new to her on so many levels. She still had to remind herself she was awake and living this experience.

“Don’t worry, we’ll ease you into this, nice and slow.” Darius tucked her hair behind her ear and kissed her temple. “I’m going to lube up my cock so slick, you won’t be in any pain.”

“His dick, little one. Darius is gonna lube up his dick and fill your ass with it.” Conall used his straightforward way so nothing was left to her imagination. He stood on one side of her as Darius came in from behind.

“Hurry up, boss. I’m barely hanging on over here,” said Aaron, his cock throbbing inside her. Then she felt the cool jolt of Darius’s cock against her virgin entrance. She was spread wide, her legs around Aaron, her ass kissing the open air. It was time to put her trust in these men just as the city had. 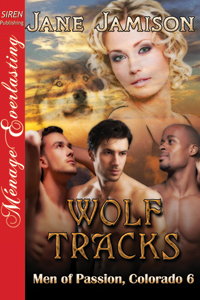