Adrienne McGuire ran the local seamstress shop, making dresses for the women of the small town of Tawas, Michigan and also mending and repairing torn and damaged clothing for all the residents and loggers living in the community. She had a good life with a loving fiancé.

When Trevor Jamison, the town’s outcast, walks into her shop, she’s instantly smitten with him, despite being engaged to another. She’s heard what people say about him possibly murdering his brother, but she’s determined to find out the truth and stand behind him, despite her family’s protests and the gossiping behind her back.

Trevor is instantly captivated by the beautiful young seamstress. She treats him kindly and seems oblivious to his past. Once he discovers she knows the truth, he worries she’ll be ridiculed right along with him and fights his feelings for her.

The color of his skin and the horrific incident with his brother has left his heart scarred, but Adrienne may be the only one who can heal him. Can he let her into his heart once she learns the truth of what really happened? 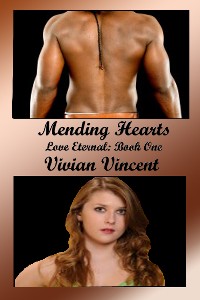 Just barely nineteen, Adrienne McGuire was very adept at making her own clothing. She'd made most of the dresses she and her older sister Caroline wore. Her parents struggled most of their lives financially. Adrienne helped when she could, making dresses for a few women around town which resulted in her opening a small dress making shop on the edge of town, just down the road a piece from the local bed and breakfast.

The Tawas, Michigan area in 1909 consisted mostly of logging and farming communities. Anyone who wasn’t involved in one or the other was either a visitor, new to town, or was the proprietor of one of the numerous small shops and markets that lined the main road.

Adrienne’s business grew quickly and she found herself needing to hire at least one other seamstress to help her ease her workload. She’d tried recruiting Caroline, but it turned out her sister didn’t have talent with a needle and thread or even a sewing machine. Her sister ended up ruining more dresses than she actually made. Adrienne laughed it off and told her sister to stick with gardening and taking care of the household chores.

Adrienne expanded her business to include repairs and alterations and most of the lumbermen who were passing through town would bring their torn and tattered work clothes in to be repaired. One man in particular caught Adrienne’s attention as soon as she saw him. Usually her assistant Suzanne took care of new customers, but there was something about this man that had Adrienne’s heart fluttering and her palms sweating. Getting to her feet, she walked out of the small office in the back of her shop and approached the tall man standing at the front counter.

“I’ll take care of this, Suzanne. You go ahead and finish mending Mr. Patterson’s shirts,” she told Suzanne, placing a hand on her shoulder gently and giving her a warm smile. She turned to the man waiting at the counter. “How can I help you, Sir?”

Their eyes locked and neither Adrienne nor the man in front of her spoke for several minutes. He stood about six foot two with long wavy black hair that stopped just below his collar. He had the deepest, darkest blue eyes Adrienne had ever seen. His nose was perfect and he had a strong, rugged jaw line and firm lips. He had a caramel complexion and Adrienne noted his dark skin looked smooth and flawless. She felt her heart beating faster and found it difficult to break eye contact with him. After the seemingly eternal silence, the man finally spoke.

“I have quite a few items in need of mending, but I wasn’t sure how much I could bring at once.” His voice was deep and smooth, causing Adrienne’s heart to beat even faster. “I have these items for now,” he continued as he placed two shirts and two pairs of pants on the counter in front of Adrienne. “They’re in the worst shape. I just can’t seem to mend these things myself.”

“Well, Sir, you’ve come to the right place. I can take care of these things for you. I just need to fill out some information. “ Adrienne finally broke eye contact with him and pulled out a small pad of paper from under the counter.

She held the pen in her hand, hovered over the paper and looked up at the man again.

“Just put it in care of Carter Bed and Breakfast. I work there.” Adrienne wrote his information down on the pad, struggling to keep her trembling hands in control. She hoped he couldn’t see how he had affected her.

“Do you have a specific time you need these back, Mr. Jamison?”

“Whenever you can get them, Miss—?”

“McGuire. Adrienne McGuire. Nice to meet you, Mr. Jamison,” she said, reaching out her hand.

The handshake lingered longer than it should have and Adrienne broke eye contact with him again. She looked down at the stark contrast of his darker skin against hers and felt her breath catch in her throat. The hand holding hers was large, nearly covering hers completely. His skin was roughened from hard work, the texture causing a shiver run down her spine.

“The pleasure’s all mine, ma’am, and please, call me Trevor.”

“I—I can have these for you by Friday, Mr. Jami—Trevor,” she stammered, still unable to look him in the eye.

“Thank you, Miss McGuire. I’ll stop by on Friday.” He released her hand and turned to leave.

“Y— You’re welcome. You can call me Adrienne,” she replied but wasn’t sure if he heard since he was already out the door.

Suzanne emerged from the back room once Trevor had left. She was jittery and nervous and nearly pulled Adrienne’s arm out of the socket when she grabbed it and pulled her into the office.

“Have you heard about him?” Suzanne asked, a definite tone of anxiety in her voice.

“About who?“ She noted Suzanne’s obvious discomfort. “What’s gotten into you?”

“That man who just left. I heard he killed his brother. Why did you agree to mend his clothes?”

“Because he’s a customer, Suzanne. I’ve never met the man before today and I don’t know anything about him killing his brother. Now if you’ll kindly release my arm, I have work to do.”

Suzanne released the iron grip she had on Adrienne’s arm and left the office. She muttered something as she walked away and Adrienne just stood there and stared at her. She wondered if what Suzanne had told her was true and she also wondered why she reacted the way she did to Trevor considering she was already engaged to be married.