Ethan has been paired with his dad as the Corporation’s chosen lawyer, and that in itself causes both old ghosts and new challenges to be resolved.

In the meantime, Ryder tries to be the supportive boyfriend and the capable boss. But he’s in way over his head, and he knows it. When all else fails for Ryder, he at least has the dance…and a trump card on the payroll he had no idea of.

Hayden had danced himself to the honor of the last dance, yet the troubles he had in his wake were more than he and anyone else had anticipated. Once Ryder was made aware of it, Hayden found himself encapsulated in a protective shield of Brutus and his brothers.

But the mob isn’t giving up without a fight, and their methods are many and dirty. 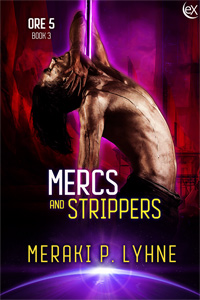 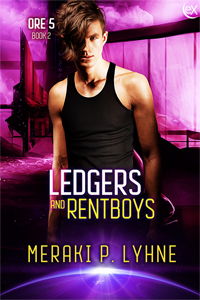 Ethan and Ryder entered the conference room where the CEO, Mr. Collingwood, and Ethan’s father, Gregor Hutmacher, waited. His father still looked like he couldn’t believe his own eyes as he stared agape at Ethan. It cut into him that his father thought so little of him, but the fact that Ethan had made it to Ore 5 on credentials he’d earned and that he had Ryder by his side made Ethan feel strong.

“Mr. Becker, this is our corporate lawyer, Mr. Hutmacher,” Mr. Collingwood said. “You’re both German as far as I remember.”

“We are.” Ethan moved to shake Gregor’s hand. “Hello, Father.”

“Father?” Mr. Collingwood asked. “Oh, well, knowing what standard you brought to this corporation, Gregor, I can clearly see why Mr. Becker was headhunted to Ore 5. That we were forced to downsize, leaving you without the promised job for a while, seems to be a happy coincidence. Had you not been hired by a private business, you would not have been in the position to discover the mafia’s attempt at a hostile takeover of some of the private businesses in this Culture.”

“You found it?” Gregor asked.

Ethan cringed at the tone, yet the positively baffled expression was new.

“On his first day on the job,” Ryder said, his tone carrying a hint that Ethan had never heard before. It wasn’t pride, though, and Ethan thought he knew Ryder well enough to guess it was ill-concealed anger at Ethan feeling insecure. God, he loved the man for that.

“Splendid,” Mr. Collingwood continued. “Shall we sit?” He motioned for the long table, and Ethan and Ryder took a seat on one side of the conference table, the CEO and Gregor on the other.

Ethan was sorry that it would be obvious if he took Ryder’s hand—even under the table, considering it was made from glass. Or, more likely, considering what they mined on that planet, Sectanium. He needed Ryder’s strength, but having him by his side was going to have to be enough.

“Have you worked together before? Like this?” Mr. Collingwood asked.

“No, Ethan’s interest was never in law,” Gregor said. Then he smiled. “He liked numbers. I was never good at those.”

“We all have our strengths,” Mr. Collingwood said. “I am, however, confident that with two such brilliant minds in each their field sitting around this table, we shall see this resolved quickly. I will leave you to work since introductions can be cut short.” Mr. Collingwood stood.

To Ethan’s horror, Ryder stood, too.

“Be right back.” Ryder followed Mr. Collingwood to the door, stopping him from leaving.

“I know you never saw me as anything but a failure,” Ethan answered in the same language. “But now that I made it here on my own, can you at least show me the respect that that feat is worth?”

Where did he get that sudden self-worth from? Well, he knew the answer. The reason stood by the door and spoke with Mr. Collingwood.

“I did respect you. I just wanted you to excel and not just let everything go like you had a tendency to do.”

“You mean this?” Ethan grabbed a love handle. “Once out from under your constant criticism, I managed to pick everything up and finish top five of Haddelbrook School of Economics. A top ten school that I even managed to get into on my own when you were no longer there to hold me back. Now. This is my report.” Ethan placed a tablet on the table and chose to ignore Gregor’s sour expression. He felt proud that he was capable of making his stance, yet his insides were in chaos.

“I don’t want to fight with you,” Gregor said.

“Then focus on the job at hand. You said all that was needed to be said the night I walked out and claimed control over my life. A control you can barely sit there and judge considering I made it here. On. My. Own.” Ethan stood and moved to take a closer look at the vegetation growing on the walls. He knew absolutely nothing about botany, but he loved the math of nature. He needed that to calm his nerves now that he couldn’t hold hands with Ryder.