After twenty years in Landworld, mermaid Ismaelda Freya seeks refuge in her home habitat, Key Sirena. In all that time, she's never taken a human lover to become fully human, but neither is she willing to give up her freedom and be marked forever as mere.

The sea dragon, Sidon, can have anyone and anything he wants, except the one female who left. Using every trick he's learned in her absence, he vows to convince her to stay.

Not even a shape-shifting mermaid can keep her options open forever. When faced with losing everything she values, Isa must choose between her freedom and her one true love. 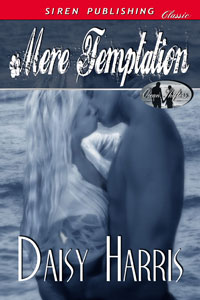 Heat Rating: Sizzling
Word Count: 35,585
11 Ratings (4.2)
Paranormal Shape-shifter
In Bookshelf
In Cart
In Wish List
Available formats
PDF
HTML
Mobi
ePub
Cover Art by Jinger Heaston
Reviews
As the first story in my Ocean Shifters world, Mere Temptation is near and dear to my heart. I love Isa's journey from New York to the Florida Keys because I'm from Florida and moved to the Northeast as a child- so it felt like coming home!

I enjoyed telling the story of a girl who went back to her hometown and fell back in love with her first sweetheart. Whether you're human or mermaid, first loves grip the imagination. Sidon was teenage-lust all grown up in a sexy-man-slash-sea-dragon package, and I just want to eat him up!

Reading the story through now, I'm really happy with how it turned out. It's sweet and sexy, and pretty dirty in parts. Karon and Gracie's subplot worked better than I could have possibly imagined! I enjoy subplot characters so much because they don't have to be nice. ;-)

I'm giving this story a rating of 4 for a couple reasons- 1. because that's what most other reviewers and readers seem to be giving it, and 2. because I like each book in the series better than the one that came before! I need to leave room for improvement.

Even though I knew what would happen, I really enjoyed reading Mere Temptation through again. Plus, this time of year, it was nice to take a mental vacation to the caribbean!

5 TEA CUPS: "Just when you think you’ve read everything in Paranormal Romance, along comes a fresh voice. Daisy Harris has captured a world of mere people, dragon shifters, and crazy mad-scientists that will keep you flipping the page to find out what she’s going to throw at you next. With a smooth blend of emotion, heat, and bio-research, the story grips anyone searching for the different. I loved the raw intensity behind the emotion in the story and the urgency behind the mission to save the mere people. When a mere and dragon choose each other regardless of the plan from society, their love will bind them closer and rise higher than the stigma surrounding them. The characters pull the story along and will have you rooting for both sides. A definite must read and I look forward to more in this series." -- Rachel, Happily Ever After Reviews

4.5 CHERRIES: "Have you ever looked for an excuse to enable you to do something that you really wanted to do? Maybe you thought it wasn't the best course of action but you really really wanted it anyway. Well, if so then you'll find you have a great deal in common with the heroine in this story. When I received this title and skimmed the first little bit I was sort of skeptical. The title did not suggest mermaids in any way to me and I wasn't sure what to make of this development, but before long I was totally engrossed in the drama playing out before my eyes. Right away I found another mermaid thinking about becoming human, but somehow I could tell that her heart was telling her otherwise. Isa finally found what, I believe, she had been looking for in Landworld when some very iffy characters began chasing her. She found an excuse to go home (hence my opening question) and right back into the arms of the dragon she loved as a young girl. Danger follows in the form of the bad men chasing her and the rest will just have to be for you to discover on your own. There were some wonderful little twists made into this story. I truly enjoyed the approach Ms. Harris used for the 'mere' folk and her brilliance in finding a way to incorporate dragons. Isa's personal dragon was hot as blazes and what they did together felt even hotter! I assure you I'm headed out on the Web to see if Ms. Harris has expanded on this story. I would love to find a series. Head on out and find Mere Temptation for yourself." -- Fuchsia, Whipped Cream Reviews 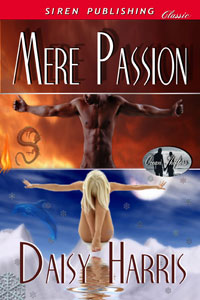 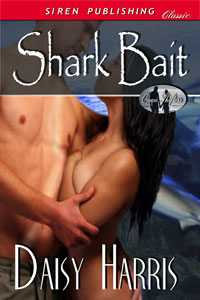 His long, tapered finger tapped just a little too hard on the table, and her eyes travelled up his arm to his tense bicep. His nervousness softened her, made her want to comfort him. She slid her hand across the table to stroke his tanned arm with one finger. His dark chocolate eyes lit up. At her touch his entire body seemed to simultaneously relax and expand, and Isa’s senses were flooded by his salty-earth smell. The tunnel-vision from the night before returned. She hovered on the verge of orgasm awaiting his touch.

As though he felt it too, he lifted her hand to his mouth and kissed the tips of her fingers. Each press of lips sent a little jolt of pleasure up her arm, but when he rose and gestured for her to do the same, she gave him a look of concern.

He bent toward her and moved his lips slowly over hers. His hands found a home between her shoulder blades and at the small of her back, and he dipped her slightly. Her muscles turned to putty and she moaned into his mouth. He took the sound as encouragement and slid a familiar hand to cup her bottom while the other hand stroked her face. He paused at her mouth to snake a finger inside along her cheek. His contented growl vibrated against her as he broke the kiss and used the rough digit to spread their mixed saliva over her parted lips.

A wave of hot need made Isa’s center clench.

So much for just kissing!

She dropped to her knees, placing her mouth over the bulge at Sidon’s fly and breathing warm air through the fabric. She squeezed her legs together and, hoping he didn’t see, pressed her hand over her mound to ease the pulsing ache. The sooner they both got off, the better. A few blow jobs and he’d tire of her, and she could go back to her life. Sidon stroked his hand softly through her hair, but when she reached for his belt, he lifted her to her feet.

“You are so sexy, and I want you to do that, but I want to lie down with you. Will you come?”

Despite being about to go down on him in the living room, the idea of going to his bedroom made her nervous. He would never force himself on her, but her self control was teetering on the edge. Sidon seemed to understand because he led her over to the cushions of the sofa instead.

Next to her on the soft expanse of white, he kissed her with a slow, deliberate passion that left her breathless. At first she wondered why he wasn’t pressing further, but her thoughts washed away in a sea of ruthless kisses and gentle hands. He stroked her shoulders and neck, before lightly trailing along the edges of her breast. His deft fingers would venture toward the peaked center, over the delicate tissue of her areola. Then his touch would drift outward again; soon Isa was arching up toward him, offering her flesh like bonbons on a plate.

He began to circle one nipple through her shirt till it stiffened and puckered. The sensation shot straight to her core, tearing her between offering him the other side and pressing herself into his hand.

Isa rolled to straddle his hips, pressing her center against the thick ridge on his lap. Sidon brought her closer, and still plundering her mouth, rocked her steadily against him. Despite the clothing between them, they both moaned low at the pressure.

His musky scent made Isa buck against him and bite into his jumping muscles. He moved to control her frenzied rubbing. She had lost all reason, and she panted and strained against him, her climax just out of reach. Grabbing her roughly, he wrapped one strong hand around her hip and the other in her hair, holding her face to his gaze.

“Come for me, Isa.” The growl of his voice raked her taut nerves, causing a hot rush of moisture to dampen her shorts. He pressed her along his steely hardness. One, two, three strokes and she cried out with spasms, calling his name while his grasp held her tightly in place.