Alice is determined to recover from a bad relationship that almost destroyed her, both physically and mentally. Maddie was a drunk and a drug addict with an appetite for sex and violence, and Alice was lucky to get away.

Alice finally has enough and moves back home to Louisiana, confident she’s managed to leave Maddie back in Tucson. A run-in with the law almost ensures Maddie is safely out of reach.

But then Maddie shows up to ask for Alice’s help. Can Alice clear her thoughts of the Wonderland characters inside her mind long enough to handle this dangerous situation? 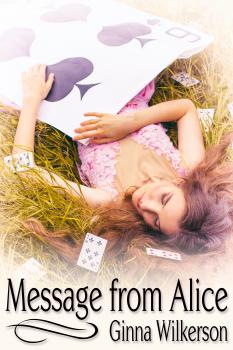 I scramble down the winding staircase from the loft and hurry to the door. Cora wafts in with the scent of cigarettes and Estee Lauder perfume, her fluff of hair in perpetual motion.

“Working?” Cora laughs a bit derisively. “Are you?”

I suppress a sigh. “Actually, I was ... and you know what I meant. How did you get away from the office on a Monday morning during tax season?" Cora and Mom are both accountants. Which perhaps explains as well as anything else how I came to be seen as the psychedelic sheep of the family.

"Tell me what?" I can hear the fear in my own voice and the distant sound of the White Rabbit's scurrying feet. Cora's news items are seldom positive.

She takes a step up to the small landing below the stairs and plants her feet firmly as if about to make a speech. I think of the Red Queen pronouncing, "Off with her head!" and suppress a giggle. Cora gives me a silencing stare.

My mind can't seem to wrap itself around her words. "Maddie?" I say. Cora shakes her head in impatience, causing a whoosh of motion in her cloud of hair. She shoves it out of her face with one hand.

Still foggy, I reply, "Where? She's here in the city? When?"

"Oh, Jesus Christ!' is Cora's reply to this. "No, she's not here. I saw her on the news last night. Arrested for involvement in some big prostitution ring in Phoenix. Quite a story. Something about underage girls from Mexico ... just thought you would want to know."

I know this part is a lie. Cora did not think I would want to know. In fact, she most certainly knows I never want to hear Maddie's name again, much less see her smug face on the TV screen. Suddenly, I am angry. And tired. Tired of Cora and her fake concern.

"Okay, well, thanks for telling me. I need to work now -- and you should get back to work, too. Tell Mom I'll call her this weekend." I start making myself another cup of coffee without offering any to Cora, my back to her as I stand at the counter. I hear her make a disgruntled noise rather like a croaking frog, but I refuse to let myself turn around. The next sound is the door closing behind Cora.

As soon as I am alone, I can focus on my own thoughts about Maddie and this latest news. It certainly isn't a surprise to me that she is in trouble with the law -- again. The only way I had extricated myself from the sexual magnetism I felt around Maddie was my own fear of lawbreaking and getting involved with the police. How I thought I could hang around with a crowd like Maddie's and not encounter the police was another one of those fantasies I let myself believe.

The fantasy world with Maddie, in spite of the drunkenness, drugs, and sketchy places we went, lasted for almost a year. Through it all, it was the sex that held me. I'm ashamed to admit that now, even to myself. Everything else with Maddie got more and more complicated and scary.

But sexually, it was a wild adventure that never got boring or ordinary. There was one time when I found two extra people in our bed in the wee hours of the morning -- people I only vaguely recalled meeting earlier that night. We even did it one night in a dark corner of a lesbian bar after drinking one too many shots of Stoly.