Lady Rose fears her best friend Abigail Bertram is growing lonely and embittered by her life as heir and sole proprietor to her family’s business. After experiencing the pleasures of induction to the Mile High Airship Club, Rose and her husband William devise a plan to cure their friend of her prim ways and introduce her to a new—freer world—of carnal desires. Taking Abby on their special vacation, they embark on a steampunk carnival soiree under the sea brimming with mermaids, a cast of lusty characters, and of course—exotic peep shows! However, a surprise none of them expected shows up to test Abby’s brass, and possibly melt her heart. Will their adventure open Abby’s eyes to what she’s been missing, or will her heart stay chained to business as usual? 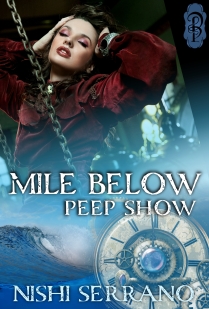 The airstat’s resnograph—a public address horn mounted from the ceiling—announced to the small crowd the swift approach of their destination. Everyone standing at the windows gasped as they neared fantastical structures built atop an enormous platform in the middle of the sea. The majority of the platform was taken up by the airstat’s landing site, and by the incredible sight of a cathedral-sized building, an enormous wind-pump, and solar obelisk. Rays of a beautiful clear day glinted off mirrors built onto the spired roofs of the edifice collected by the obelisk, and generated enough steam and current to power a small city. Two winged statues from some mythological fancy, supported the base of the massive wind-pump, and the elegant curve of its blades lazily turned in the constant sea breeze, creating a perfect source of clean water to the resort.

Abigail gazed on in surprise. “Why look at the size of it. How many people do you think fit inside?”

Always a fount of information, William said, “Actually, most of the refuge holds quarters for the staff, engineers, and alchemists. You see it’s owned by Leviathan, and most of the year functions as a research center, playground for the leagues many employees, and four times out of the year as an invitation-only retreat.”

“And how does one obtain an invitation to such a remarkable place?” Her suspicion roused when Rose and William smiled clandestinely between one another. Whatever could the two be hiding?

Rose leaned in and whispered. “Well…by a formal invitation to a secret club.”

Abigail frowned. “You never told me you joined a secret club.” At precisely that moment the resnograph heralded their hasty arrival. She pointed to the large shimmering sign above the grand entrance of their temporary abode. “Mile Below…what a strange name….”

Rose laughed. “My dear friend, what wonders wait below the waves—oh, you shall see!” 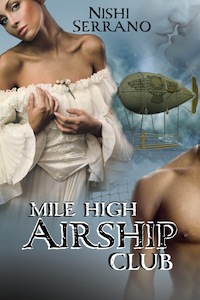