Australia’s Outback is a tough place to work. The heat, the red dirt that gets into everything, the flies, and above all, the isolation. Mining is big business in Western Australia, but it’s hard work. No doubt about it. Twelve hours on and twelve hours off. Just enough time to eat, shower and sleep. Or, if you’re lucky enough, you might find another way to pass the time.

Duke is all man. He’s made of just the right kind of stuff to handle the demanding life of a miner. But even real men need some loving -- a warm body to feel next to theirs during the cold desert nights. One day, he opens the door to his small, portable cabin and meets his new roommate, Josh.

A handsome man, Josh has worked his fair share of mine sites. As Duke begins to peel his dirty, sweat-soaked clothes off, Josh becomes aroused. He tries his best to hide it, but as he is removing his clothing as well, Duke soon notices.

Both men know life in an Outback mining camp can be hard, demanding, and downright tough. But it doesn’t have to be ... 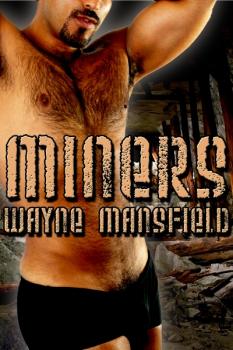 The first thing Drew did once he got the door open was drop his bag and turn the air-conditioning on; it’s icy blast like a lover’s kiss against his sweaty, suntanned skin. He closed his eyes to savour its soothing breeze, barely getting a chance to enjoy it completely before hearing a noise at the door behind him.

“Hey, you must be Josh,” said the burly man who entered, pulling the door shut behind him. “I'm Duke. You been here long?”

“No, the plane just got in about half an hour ago,” said Josh, shaking his new roommate’s hand. “I didn’t realize how far out this mine site was. I used to work in Kalgoorlie, which wasn’t too bad, but this one is out in the middle of nowhere.”

Duke smiled and took his jacket off. “Yeah, it’s a bit of a shock at first, but just wait until you start doing your twelve-hour shifts. You’ll climb into that bed so exhausted that you won’t care where you are.” He threw his jacket onto the bed. “Which team are you on?”

Duke began to unbutton his shirt. “I’m Team A and we do the morning shift. I guess that’s why they put us in together. You’ll be getting in just as I’m heading out.”

Duke peeled his plaid shirt off to reveal a broad, muscular chest covered in a thick mat of dark hair. Two large nipples sat atop the solid mounds of his pectoral muscles, sticking out like teats. His arms were massive, the forearms thickly-haired, and he had a tattoo of a mermaid that rippled on the skin over his left bicep.

“I'm gonna grab some sleep. How about you?” asked Duke, his hands busy at his belt buckle. “Or are you gonna head over to the mess hall?”

Josh shrugged his broad shoulders. “Might as well hit the sack. I’m a bit tired after the flight up from Perth.”

He unbuttoned his shirt while Duke pulled his work boots off. Soon the room was filled with the smell of sweaty feet. It was a smell Josh was used to. No point in being disgusted by something he couldn’t help. Duke’s boots were left exactly where he dropped them, while his socks were tossed into a corner where there was already a sizeable assortment of dirty jocks and socks.

They shared a laugh and continued to undress.

“You don’t have to apologise,” said Josh, pulling his boots and socks off while Duke slipped his Levis and jocks down to his ankles. “They’re mild compared to some I’ve smelled.”

When the giant man leaned down to pull his jeans off, Josh found himself unable to take his eyes off the man’s thick, solid thighs and lightly-haired butt cheeks. They had parted a little, so Josh could see the nest of dark hair that sat in the centre of his roommate’s arse crack. He tried not to look, but the view was so inviting that he couldn’t help himself. Naturally he felt himself getting hard and a flood of panic swept through his body. He fumbled with his own belt buckle, his jeans falling to the floor just as Duke turned around.

“I might snore, mate, so I’m gonna apologise in advance,” he said with a smile, his teeth brilliantly white against the deep red of his lips and the dark brown of his thick moustache and goatee. He looked down. “Fuck, mate. What’s that?”