Randal Cummings is about to be given his first ministry, but he has a secret: though he has been prayed over and supposedly delivered from the perverse demon of homosexuality, he is still as queer a rhino with wings. To make matters worse ... his ministry is to those who share this abominable affliction and wish to be freed from its bondage.

Then Randal meets a man who shares his desires. Can he suppress his feelings for his ministry or will he find his own deliverance in the end? This lighthearted spoof of a conservative religious community answers one simple question -- who ministers to whom? 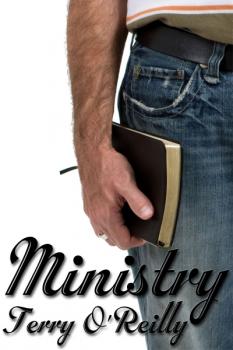 Following the directions Doug had given him, Randal parked the car in the patient lot of the Physical Medicine and Rehabilitation Building, walked through the slushy snow to the entrance and took the elevator up to the third floor. He found the suite where Doug's office was located and walked up to the receptionist.

“Do you have an appointment?” She frowned apparently looking at the list of Doug's patients for that day.

practice referred you? Mr. Carter is seeing his last patient of the day. I don't seem to have anyone else listed.” “Oh, I'm not a patient. I'm a ...” What am I? Spiritual counselor? Sex therapist? Insurance salesman? “A friend of his. He's expecting me.”

“Oh, I see,” she said with what could have been a wink. Does she know about his affliction? Did she think I’m one of his ‘special’ friends?

“Oh ... um." Randal couldn't think fast enough to do anything but tell the truth. But, then why shouldn't he? He wasn't one of Doug's playmates; he was here on legitimate business -- the most legitimate of all: God’s business. “My name is Randal Cummings from Weston.”

The receptionist switched on the intercom. “Doug?”

“Cummings from Weston. He says he has an appointment to see you.”

Randal had never noticed the sexual connotation of his last name until the moment when he heard Doug say it. Now he wished his name was Collins. He thought he was blushing as the secretary regarded him.

“Oh wait, is his first name Randal?” came Doug’s voice over the intercom.

“Now I know who he is. Just have him wait a minute. I'm almost done here.”

Randal sat down in the seat that the young woman indicated and waited. It couldn't have been more than five minutes but it seemed like hours. He could feel sweat running down his sides.

Finally the door opened and walking toward him was a six foot three inch, two hundred pound Adonis with what had to be premature silver hair and a smile that caused Randal's toes to curl and his dick to twitch. He felt weak.

“Randy." Doug stuck out his hand and shook Randal's as he pulled him to his feet. “You don't mind if I call you Randy, right?”

At that moment, Randal didn't care what this man called him despite the fact that it crossed his mind that Doug might be implying a double entendre by using ‘Randy’ as his name. He had never been this close to another gay man that he knew of, and he felt like he was generating enough electricity to light the whole damned building.

“Carol, Randy and I will be conferencing for awhile. I don’t want to be disturbed, Doug told the receptionist. “You can close up and go whenever you want.”

“Thanks, Doug,” the receptionist replied. “Nice to meet you, Mr. Cummings.”

She smiled. Randal felt himself blush again. Had she been through this routine before with her boss? He pushed the paranoid thoughts from his mind and responded to her.

“Nice meeting you, too.”

Doug led him to an office off the main reception area. He indicated a seat, which Randal took. Then he closed and locked the door behind him.

The room was large and had equipment in it that Randal assumed was used in Doug's work with his patients. There was a large desk in the corner covered with papers and folders. Certificates attesting to Doug's qualifications along with seascapes decorated the walls. Doug pulled the chair from behind the desk and sat directly in front of Randal with his legs spread. He was in hospital scrubs and they left only minor details to the imagination. These imagined qualifications were as impressive to God’s chosen crusader as the ones on the walls.

“Let's get started,” Doug said. “Whatta we do first?” he said wetting his lips with his tongue. Randal felt faint.