Lindsay Baker is intrigued by everything about the middle ages, but when she purchases an antique mirror and a costume to attend a Renaissance Faire, she suddenly finds herself transported back in time. There she finds she’s been called by a witch to right a terrible wrong.

Graham loves Prudence, but he can’t marry her because he’s landed gentry, and she is only the baker’s daughter. Before Lindsay can return to her own time, she must convince Graham to marry against his father’s wishes. Unfortunately, she also finds herself falling for the handsome gentleman. Can she find her way back to her own time, or will she be stuck in a time when women had no rights? 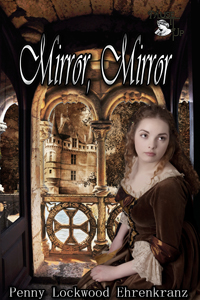 “Fool-born child! Watch where you are walking. The master will have your hide for getting mud all over his clean shirts.”

Someone pulled her ear—hard—and Lindsey yelped with pain. She was tugged up into a kneeling, then standing position, before she opened her eyes. She realized in the first moment she was no longer in Oregon.

“Where is your cap? If the master sees you with your hair hanging down all over your face, he will switch us both.”

She stared wide-eyed as a large, buxom woman bent down, picked up dirty white shirts from the ground, and thrust them into Lindsey’s arms.

“‘Tis not here. Take my extra one.” The woman grabbed Lindsey’s hair, balled it, and shoved it into a long, sleeve-like cap, which came to Lindsey’s forehead and fell down around her shoulders. Balancing the load of shirts with one hand, she felt the cap. Not a shred of her hair was showing.

“Well, donna be thanking me now. You just watch what you be doing next time, clumsy girl. Now march back into the washhouse and get the mud off those shirts. When you have finished, hang them out to dry. Then get you into the kitchen and help cook with dinner.” The woman brushed her hands off; then she smoothed her apron and marched through a courtyard toward a large stone house.

Dumbfounded, Lindsey stood where the woman left her. She looked down at herself and saw she still wore her second-hand clothes from St. Vincent de Paul’s. Her feet were bare. Then she noticed the woman walking away from her was also barefooted. Despite the muddy courtyard, the air was warm and so was the soil. But where am I? As she looked around, the structure of the buildings reminded her of pictures from her British History course in college.

In the opposite direction from which the woman took, Lindsey noticed a path leading to a small outbuilding. Smoke rose from a chimney. She trudged back to the washhouse, opened the door but stepped back outside when her eyes began to tear, and the heat blasted her face. Do people actually work under these conditions? With the door opened, some of the smoke and steam cleared, and she was able to see a large wooden tub sitting on metal legs straddling hot coals. Lindsey dumped the load of shirts into the tub, picked up a stick and stirred the load in the water. Before long, her muscles ached, and she had blisters on her hands. Once the tears began, there was no stopping them. Until this point, she hadn’t thought much beyond putting one foot in front of the other. She collapsed on a small overturned crate and with head in hands, had a good cry.

With red, puffy eyes, and stuffed nose, Lindsey looked up when the door opened. A wizened old woman leaning on a cane shuffled in. She looked at Lindsey with questioning eyes. “Is it really you, Mistress?” she asked.

“What do you mean? Who am I supposed to be?” Lindsey responded between sobs.

The old woman began to dance. “It worked! It worked!”

Lindsey wiped the tears from her eyes with the bottom of her skirt. “What worked?” she asked, realizing this woman might know what happened.

“Why the summoning I did for Mistress Prudence. So you’re the one, eh?” The old woman pinched Lindsey’s cheek and turned Lindsey’s face from side to side to get a good look. “Well you do look like the young Mistress.

When are you from, then?”

“You did say when, not where?”

“Of course. I know you’re not from now, foolish simpkin. I brung you here.”

“‘Tis the year 1421, and you need to get busy, little missy. You need to get the Master to accept Prudence as his bride. Soon as you do, we can send you back from whence you came.”

Lindsey stood and looked down at the little woman. “Just how do you propose I do that? Who is this master, anyway?”
“Why, he be the master of the house. He loves our Prudence, he does, but his father wants him to marry for money. He’s just distraught our Master is. I wager you be a smart woman. You can get our Master to marry you. I canna help you anymore, but I’ll be watching you.” The crone turned and shuffled toward the door. 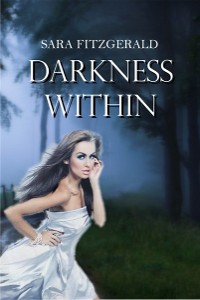 Darkness Within
Sara Fitzgerald
In Shelf
$3.99
Tweets by
sirenbookstrand