It isn’t going to happen to Dave Fleming. No way. He isn’t going to end up growing old. He has this aging thing beat. He works out, eats healthy, takes all the right supplements. As a result, he’s a handsome man, with a killer body, and it’s going to stay that way.

But it doesn’t work. Though he’s done his best to swim upstream, Dave is swept steadily along to senior citizenship along with everyone else. In the process, he passed up chances for love. Now here he is, in his twilight years and alone, sharing his life with his faithful Labrador.

One night as Dave stands before his bathroom mirror getting ready for bed, he bemoans the fact that he was so absorbed in the physical that he’d let love pass him by. He stares at his reflection in the mirror and wishes he could go back, be young again, and experience it all once more, even for just a short time. Maybe he’d even find love.

If Dave gets his chance, will he take advantage of it and make his wish come true? 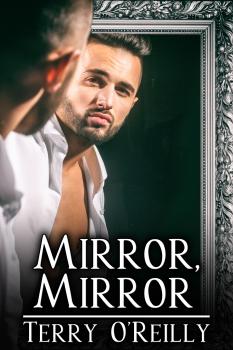 Love? Why had love come into Dave’s mind? That train had left the station long ago, and he’d never seriously thought about hopping aboard. He’d been so absorbed in the physical that he’d let many chances at love pass him by. The few relationships he’d had that bordered on love were soon abandoned for frivolous reasons, and now here he was, just too old to even consider it. Intimate sex no longer seemed possible. So what good did it do to think about love?

As he waited for Cleo to finish her business and come in, he shot off a quick thank you text to Nick, offered apologies for leaving the party early, and closed up the house. Then he and Cleo went upstairs to their bedroom. She jumped up and settled on the bed while he undressed, slipped on pajamas and a robe, and went to the bathroom.

As Dave cleaned his teeth, he gazed into the mirror. “Mirror, Mirror on the wall, who is handsomest of all?” he recited in a mocking tone as he brushed.

Not you, you old goat, that’s for sure, he imagined the mirror replying.

He spit out the toothpaste and retorted. “At least I’ve got my own teeth! Most of them anyway!”

He stared at his reflection. “The years have gone by so fast. I never gave a thought to the future -- and this.” He held out both hands to his reflection. “I never thought of what a lonely life I’d have if I never found someone to share it with. Dave turned out the bathroom light and went back into the bedroom.

“Move over, Cleo,” he said gently to the dog which was lying in the center of the bed ensconced on the pillows. He pushed her to one side. She groaned in protest but moved over. He lay down, spooned against her, petted her behind the ears, and kissed her goodnight on the top of her head. “How about it, girl? You want to be a puppy again?” She turned her head to him and licked his nose. Dave rolled onto his back and stared at the ceiling. For a brief moment he allowed himself to picture the red-haired young man from Nick’s party. He was smiling at Dave, leaning closer and closer. Their lips met. As the kiss continued, the young man morphed into another man who was at the party -- the older one, the one who knew Dave, but whose name Dave couldn’t remember. Dave shook his head, the image faded. He sighed, turned back to Cleo, and fell asleep.

Dave opened his eyes to see Cleo, her head on the edge of the bed, nose to nose with him. As soon as she saw he was awake, she dropped to a puppy bow, then started running in circles, barking loudly.

“What’s gotten into you?” Dave asked the dog, which was now bounding onto and off the bed. “You haven’t done this for years.”

He stood up and stretched. He immediately became aware that he had an extremely rigid erection. “Haven’t had morning wood like this in years, either,” he said, looking down at his tented pajamas.

He and Cleo made their way down the stairs. Dave immediately noticed he was skipping down without holding onto the rail.

“What’s going on, girl?” he asked the dog, who had raced him to the bottom. She jumped up, put her paws on his shoulders, and licked his face.

The stairs ended in the front entry hall. He put Cleo down, stepped into the hallway, and glanced at the ornate mirror. He let out a loud shout and fell backward against the opposite wall in total shock. He regained his balance and stood up. Slowly he looked at his reflection once more.