On New Axon, the gambling capital of the galaxy, some bad guys kidnapped a wealthy man’s child. But they made one big, deadly mistake. They took Galactic P.I. Majestic Kane’s daughter as well. Kane really loves his daughter. They shouldn’t have done that… 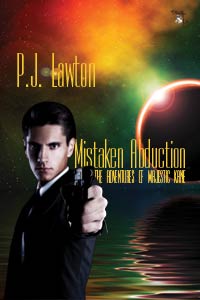 “Sans, what’s wrong? Come on now, please stop crying and tell me. It’s Sissy isn’t it? Something happened to Sissy?”

“Taken? What do you mean taken? Do you mean kidnapped?” Kane hated kidnappers with a passion. He placed them as low on the lowlife list as drug dealers or androids. “Why would someone snatch Sissy?”

“Actually it was Jason’s daughter Bonnie who was kidnapped. You remember my boss Jason, don’t you? Right, Sissy was with her and got taken at the same time.”

“Well hell, Sans, how could it happen? He’s some kind of big shot, isn’t he? Weren’t there security guards or something?”

“Yes, there were.” She sounded a little on the defensive. Was she hiding something? “Three members of his security team were killed; two humans and an android.”

Oh no, if they were willing to arbitrarily kill for the snatch, then we have a heck of a problem. Our chances of seeing the girls alive again have just been decimated.

The numbness of his initial shock was wearing off. He was getting angry. “When did this happen? Why didn’t you call my mobile vid?”

“The day before yesterday. I did call your mobile; I called at least twenty times. If you took it with you it must have been switched off. That’s why I kept leaving messages. I figured you would have to come home sometime. Kane, it’s not my fault.” She was crying again.

He realized he hadn’t taken his mobile on the trip – there it was, right in front of him, sitting on top of his desk. The battery probably would have gone flat anyway, since he seldom remembered to recharge it.

“Look Sandy, I’m sorry. Of course it’s not your fault. I can’t understand why they took Sissy too. They must have known she wasn’t part of the snatch. I’ll get the next shuttle out. I should be there sometime today. Hang in there kid, okay?”

In a very weary voice she said. “Kane, I’m scared. I don’t know why she was taken, I’ve been trying to think of a reason, but I just don’t have an answer.” She paused. With a touch of relief in her voice, she continued, “Okay, send me your flight data and we’ll have transport waiting for you. And uh, Kane…thanks.”

Kane realized she must be exhausted, having probably had little or no sleep in the two days she’d been trying to contact him. He made a couple of calls, stuffed some clothes into a carry-all bag, and grabbed an electro-cab to the spaceport.

Kane arrived in New Axon around six p.m. local time. New Axon was one of the moons of Terra. It had been nothing more than a large dead rock, until some gamblers took a chance and built a large domed complex to house their small spaceport and Casino. In the past two centuries the venture had expanded to include four domes and fifteen Casino-hotels. It was the favorite vacation spot for the rich and famous from all planets.

Kane went through the cursory customs check, and then located the land scooter Sandy had ordered for him. It was a short drive to the Casino. He was shown into the rear work area of the Casino where most of the offices, including Sandy’s, were located.

Sandy looked great, at least at first glance. She was slim and tanned, and glowed with health. A tall, broad-shouldered man was holding her as she sobbed quietly. When she saw Kane, she moved away from the man to her desk and lit a cigarette. Hadn’t she quit smoking after the divorce? And who’s this idiot with her?

“Kane, thanks for coming.” Looking toward the tall man she continued, “This is my fiancé, Hollister James. Hollister is an Enforcer with the New Axon Enforcement Division. Hollister, this is my ex-husband Majestic Kane.”

The two men merely nodded at one another, neither offering to shake hands. From his appearance and attitude, Kane immediately dubbed him Mister Enforcer. What a pompous, pretentious jerk. The animosity in the air was palpable. Hey pal, what’s your problem anyway?

Picture This (MMF)
Tonya Ramagos
In Shelf
$2.50
Tweets by
sirenbookstrand