Mistress of the Undead

The city of Boston is infected with zombies, roaming the streets and seeking human flesh—not to eat but to use as sexual servants. Mattie, one of the tribe, wants out. She’ll do anything—manipulate, cheat, lie—to get what she needs to break free from the sex cult.

Hayden Thomas, tabloid reporter and wonderkid, knows first hand how cruel and consuming Mattie can be. Book smart, a good writer, and willing to do anything to get the story that will take his career to the next level, he’s made some depraved enemies.

In a city that thrives on scandal and conspiracy, nothing is coincidence. Beware: once you’re in, you’re in. 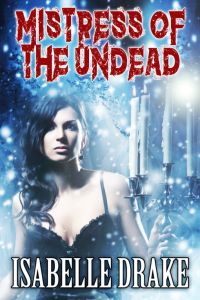 Mistress of the Undead

The blizzard from the last few days had softened to flurries. Flakes whispered through the cold night air, landing lightly on top of the huge swells of snow the storm had left behind. Some of the snow settled into the corners of the window sill. Some floated through the pale light cast out from the street lamps. The gentle scene was a lie.

Snowmaggeddon had delivered something worse than treacherous feet of snow. It had brought them. And now the entire city was infected and in danger.

Mattie, his possessor, was near. He imagined her skittering across the roof of the brownstone, muscular thighs twitching, ice hanging from her tangled hair. She’d gaze into any window she could, steal the humanity from those inside simply by watching them. Maybe she’d do more. Maybe she’d find a loose window, get into their apartment, take what she needed and leave.

He was almost relieved. In some ways the anxious anticipation of awaiting her arrival was worse than her presence. With her there, he’d soon have an outlet for his anger and disgust. A chance to fight, to fuck, to give in. After he dropped his hands from the window, he could see the green glimmer of her eyes reflecting off the glass. The chill from her body caressed him as she moved forward. The pressure of her knee against this thigh was the first point of contact.