Alone for too long, they’ve finally found each other and home. Now, they’ll have to fight to keep both safe.

Nick Wyatt lost his mate and vowed never to love again. The hurt’s too deep. Portia Danes knows about loss. When her parents were killed, they left her as the only shifter in their hometown. Needing to be with her own kind, she found Moonlight…and Nick.

Nick fights his longing for Portia but can’t resist, coming alive within her loving and lusty embrace.

Heated days and nights follow. Their bond grows and so do a series of strange accidents in Moonlight. Minor at first then increasing in gravity and frequency. When the pack’s suspicions ignite about Portia, Nick must defend her against an unexpected enemy or risk losing her forever. 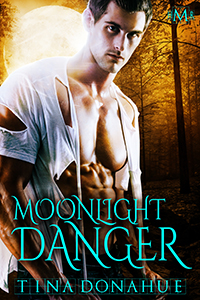 Nick Wyatt stepped into the bungalow kitchen, stopped dead, and should have run. Welded to the spot, he drank in the scene, his mouth going dry.

Portia Danes reclined on the black-and-white linoleum, long legs stretched out, skin sun kissed to a rich caramel color. A dainty rose tattoo graced her right calf, a kid’s Band-Aid on her left knee, the strip depicting what looked to be a mermaid. Maybe that had been her fave cartoon character as a kid. She was twenty-six now. Lush. Ripe. Pure female. He lost his smile. Perspiration rolled down his chest, his reaction having nothing to do with the sticky May afternoon. Her heady scent surrounded him—clean skin, a flowery shampoo or soap fragrance, and musk. A woman and she-wolf’s provocative aroma.

He leaned against the jamb for support. Leaving still wasn’t an option.

Blindly, she groped for a tool to her side, selecting an odd-looking wrench he couldn’t identify, since he wasn’t a plumber. In his thirty years, he’d never seen one dressed as she was now. Pink socks with lacy edges peeked past the tops of her work boots. Her denim overall-shorts were more Daisy from Dukes of Hazzard than a Future Farmers of America member toiling in the tomato fields. Her tank top was also pink, matching her cute socks.

She worked the tool and grunted, her left heel digging into the floral bedsheet beneath her, creating an oddly provocative scene. Like a woman in the throes of passion, fighting against release, wanting the pleasure to continue for hours with him naked and willing above her.

His senses roared into overdrive. His cock thickened painfully. Time to go. Actually, well past that point. He didn’t need her complicating his life. Nor did he deserve happiness or peace—a matter his friends had argued against, telling him every wolf needed a mate.

Easy for them to say. They hadn’t gone through what he had.

Portia’s tool rattled against the floor. She pulled the pen flashlight from between her lips, scooted out, and gave him a wide, welcoming smile. “Hey.”

His mouth refused to work, every word he’d known drifting away. Chestnut tresses cascaded over her shoulders, blonde streaks on each side framing her face. He would have bet his life her hair was softer than kitten fur. The green flecks in her hazel eyes were amazing. Her pouty lips looked moist, the same as they’d be after him kissing her long and deep. His balls ached. “Ah….”

She leaned back, legs drawn up like a 1950s cheesecake drawing. Sweetly sensual. “You’re ready to do the floor?”

He gripped his roll of linoleum. “Not until tomorrow.”

He’d planned to drop off the material, not run into her. Doggedly, Nick had avoided Portia since she’d joined the pack, hoping out of sight would be out of mind. Yeah, right. Her scent permeated everything, teasing, enticing. Too many nights he’d awakened in a sweat, panting from his wet dreams, followed by remorse over his past sins. He placed the roll near the wall. “Didn’t know you’d be here.”

Understanding flashed across her pretty face mingled with disappointment. She was on to him. Hell, anyone older than seven would have caught on to how he’d continually dodged her.

He gestured to the sink. “Go on. Don’t let me bother you.”

“You’re not.” She smiled softly, making a small dimple. 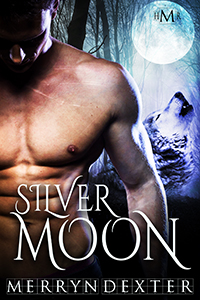