Imprisoned by the dark fae for crimes against her people, Tulip was left to rot in the palace dungeon. When she finally escapes, she wills her magick to take her to Ashton Grove, in hopes the wolf pack will help her. She never counted on coming face to face with the most intriguing male she'd ever met, or that he'd be growling and intent on making her pay for a crime she never committed.

Vaughn doesn't trust the dark fae, especially ones who pop up out of nowhere, but it doesn't take him long to realize that Tulip is different. His beast rumbles in pleasure when she's near, and the wolf has never shown the slightest bit of interest in a female before. Claiming her for his mate was never part of the plan, but now that she's his, he'll do everything he can to protect her. Even if it means welcoming more fae into his home.

Tulip tentatively pushed on the door of her cell. It opened with a loud creak that made her wince and she checked the dungeon entrance for approaching soldiers. There had been a shift in the air, and for a moment, it felt like the magick of the dungeon had dissipated. Since Onyx had died at the hands of a wolf pack, she’d been confined to this cage, left to rot. The palace dungeons were spelled to keep even the most powerful fae under lock and key, but for whatever reason, the spells had failed. Tulip crept from her cell and to the large arched doorway that led to freedom.

Her body was weak, and her legs barely held her. Her hands shook as she felt along the dark, damp walls in her search for freedom, the slick stones scraping against her palms. The hair hanging in her face was matted and dirty, and grime covered the rest of her body. It had been months since she’d been put in the dungeon, maybe longer. Time had passed slowly, even for a fae. Taking away her freedom, and locking her in the dark, was cruel for someone who would live for thousands of years. She had little doubt they’d have left her down here for a few hundred years or longer, before remembering she was a prisoner.

As she pressed her back against the wall, Tulip opened her senses and tried to feel for any vibrations in the air that would signal someone’s approach. The dungeons remained cold and silent. Creeping around the corner, she stepped into the corridor and looked around for any signs of nearby soldiers. The place was empty. A shiver raked her spine as she took in the changes to the dark palace. The tapestries hung on the wall like specters and dust covered every surface. Had it been abandoned? Had she been abandoned?

Tulip didn’t dare breathe a sigh of relief just yet, and made her way through the palace and out to freedom. Darkness clung to the palace walls, shadows reaching for her. The air was damp and suffocating; the must from unused rooms surrounded her. She eased through the door and into the courtyard, a place once filled with life and now covered in death and decay. There wasn’t a living soul around, so Tulip closed her eyes and willed herself to the mortal realm, her thoughts on the Ashton Grove pack and safety––and ended up straight in the middle of a bar fight.

The force of a male body slammed her to the sticky floor, the floor hard and unforgiving beneath her slight frame. She cried out as pain rattled her from head to toe. She’d been without magick for so long that she didn’t know if she’d be able to heal herself or not, already feeling bruises form along her hips and back. She shoved at the brute on top of her when he was suddenly lifted and tossed aside. Tulip looked up into the gaze of the most attractive male she’d ever seen. Dark blonde hair fell across his forehead and stormy blue eyes peered down at her. Tattoos peeked out of his shirt and she felt the urge to trace them with her fingers.

Then his eyes flashed yellow, and his fangs lengthened. Tulip let out a small squeak as she scurried away from him, putting a table between them, and nearly falling in her haste. Her legs trembled from the effort of holding herself upright. What she needed was a bath, food, and rest. Lots of rest. She’d been too scared to sleep in the dungeon, for fear things would creep into her cell and nibble at her fingers and toes.

“I’m not here to cause trouble.” She put her up hands. “I need your help.” 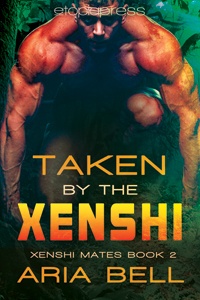