Will Reylin be brave enough to take both men into her heart…and her bed?

Reylin Foster never asked for Rune and Tristian's devotion, but they gave it to her. They've waited patiently for her to come to terms with the fact that they're meant to be together…all of them. But Rey knows what they're proposing just isn't normal—a wolf doesn't have two mates—and she refuses to be the subject of pack gossip, despite the fact that she loves both men.

When their pack is attacked and the life of her cousin's human mate hangs in the balance, Reylin fights to save those she loves. She's not the kind of girl who's willing to let the guys do all the fighting. But Rune and Tristian stay right by her side. They will protect the woman they love.

The thought of losing Reylin makes them more determined than ever to convince her to finally accept her destiny. She's brave enough to fight without a second thought, but is she brave enough to accept them as her mates?

First though they must defeat the enemy, and the alpha of this rogue pack is out for blood. He needs females for his pack, and he'll take them by force, but he wants more than that—he wants revenge for a past wrong.

More From The Moonlight Series

Tristian kissed Reylin's temple. "I know." He gently pushed her hair off her neck and kissed her under the ear. "We're connected."

She trembled in his arms. "I won't choose."

"We don't need you to. We've always shared well." He pulled her closer.

Rey pressed her lips together and turned so her face nuzzled his neck. He smelled so good. He felt like home and summer and happiness. Tristian felt like her future.

"Stop doing this to me," she whispered.

"I'm not doing anything. It's only natural to feel like this around your mate."

"A wolf doesn't have two mates. It's not right." She started to pull away, but he held her to him for a second before he released her.

Rey stood and rubbed her arms. She turned away from him, trying to clear her head.

Tristian came up behind her, wrapping his arms around her. "When you were in danger I lost my head. Because I lost my head, Bianca might die. I don't know how Law lets his mate stay human and manages to function. You're my entire world, whether you like it or not. Rune and I share a soul. You know our connection is rare. We've always shared everything, so is it such a stretch for us to share you?"

"Yes!" Angry, her wolf felt cornered, and that made her want to lash out at him, until she looked into his beautiful eyes. She took his stubbled face in her hands. "You ask too much of me. My heart tells me to accept you, both of you, but my head tells me I can't live the rest of my life with the pack looking down on me. I won't raise my family without my pack."

Tristian grinned. "Family? One step at a time, sweetheart."

Heat bloomed in her cheeks again, much to her annoyance. Rey let out an irritated huff of breath. "We need to focus. Bianca needs us, and—"

She didn't get to finish because Tristian pulled her to him for a rough kiss. She wrapped her arms around his neck. Electricity shot through her body, and she moaned against his mouth.

Kissing him felt wrong because Rune wasn't there. She pushed him away, feeling like a cheater and confused as hell. 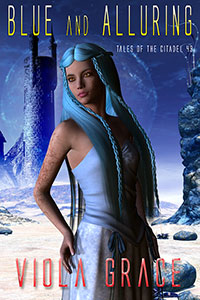