Captain Temple leads a mission to K22 and finds a beautiful planet with magnificent shining cities. It appears to be a lucrative new market for the Merchants Guild.

There’s just one problem: the cities are mysteriously empty. He can’t find even one survivor, which means the planet is off-limits to commercial exploitation and cannot be used to achieve financial profits in any way.

Soon Temple discovers an even greater problem, one that is strange and ominous and threatens his crew’s very survival. Not only that, it is an incredible cosmic mind-stretcher that strains sanity to the breaking point, not just the characters' sanity but the readers' as well. 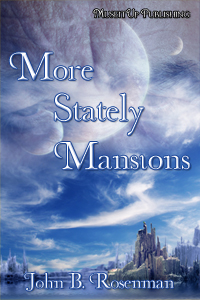 "The city appears vacant, sir," Lieutenant Harper said. He craned his head to look up at a slender, elegant white pillar. "Our men have reported there's not a sign of life anywhere."

Captain Temple squinted in the bright yellow glow of the sun. "Like the other cities, huh?"

"Yes, sir."
Frowning, Temple glanced about the city. It looked almost as if it had been occupied yesterday. Where had the inhabitants gone? From space this planet, designated as K22, appeared beautiful—even alluring. Yes, it was true ships from the Traders League had visited it a century before. However, they never returned or beamed any messages. Since the League was known for its ruthless factions, authorities assumed betrayal was involved.
Whatever the case, K22 was too tempting to pass up. Though there were no radio or heat waves, it possessed cities, indicating intelligent life and a rich new market for the twelve-worlds' Merchants Guild. Even conservative estimates were positive. Later, when their contact ship landed to explore, there had been a problem.
"There's no sign who lived here?" Temple asked. "No holos or pictures?" Caldwell, the crew's xenobiologist, shrugged. "Not even one, Captain." He smiled. "It's the same as the rest—a veritable ghost town."