Most Likely to Succeed (MM)

Thomas Harrigan can't help but admire his sexy, single, and openly gay boss, Clark Sterling. He never expects the gorgeous lawyer to be interested in him. But when Clark makes his interest shockingly clear, Thomas find himself involved with the enigmatic man.

Burned before by a disastrous office romance, Clark knows he should keep his relationship with Thomas professional. But there’s something disarmingly genuine about Thomas that Clark can’t resist.

The more time Thomas spends in Clark’s company and bed, the more he knows he is falling in love with Clark. But when Thomas’s resume finds its way to a rival firm, owned by the very man who hurt Clark before, Clark cuts Thomas out of his life leaving Thomas wondering if he really is the most likely to succeed.

Most Likely to Succeed (MM)

Thomas sighed, sipped his iced tea, and wished it were perhaps something a little stronger. He took out his own cell phone, intending to call his office voice mail to check for messages. When Matt sat down across from him once more, he didn’t even look up.

Thomas froze. The voice was familiar, but it didn’t belong to Matt. He glanced up and into the charcoal-gray eyes of Clark Sterling. He blinked. His stomach plummeted. “Mr. Sterling?”

“Clark, remember?” Clark smiled. “You were saying something about being fast? Maybe, but I don’t believe in waiting around when there’s something I want.”

Thomas swallowed and hoped his face really wasn’t as flaming red as the heat he felt indicated. “I thought you were my friend returning.”

Clark nodded. “Ah, your friend. Pretty boy. Is he your significant other?”

“No, just a friend.” Thomas prayed very hard that Clark hadn’t just heard what he said to Matt about him. Shit. How the hell could he find out without spilling his guts? “I didn’t know you were here. When did you arrive?”

The other man gave him a mysterious smile. “I’ve been here a while. In fact, I went ahead and asked the waitress to bring my dinner to your table. I hope you and your friend don’t mind.”

Thomas stared, unsure what to say. He felt like a big fool. Instead, he sat there silently gazing at Clark’s male beauty. He wore a gray suit that matched his eyes perfectly, a crisp white shirt, and a pale-pink tie. Thomas’s mouth watered.

Okay, he didn’t mind, but could he speak for Matt?

“Hello,” Matt said, arriving back at their table.

Clark stood up. “I’ll let you have your seat back. Clark Sterling.” He held out his hand and shook Matt’s when he offered his.

“Yes,” Matt said, smiling easily. He slid into the booth. “I interviewed at your firm, but you hired Thomas instead.”

“I’d love to. I had just invited myself as you were returning.” Clark motioned to Thomas. “Move over a bit, won’t you?”

He had no choice. He moved over and allowed Clark’s big, imposing body to sit next to him. Thomas bit his lip. The man smelled good. A mixture of some spicy cologne and maleness. He couldn’t quite explain it, but Thomas liked it. Too much. His cock perked up. He shifted.

“Everything all right with Josh?” Thomas blurted out, trying to pretend Clark Sterling sat this close to him in a restaurant booth every day. The man’s thigh pressed against his, and Thomas had a feeling it was no accident.

“Yeah, he was just on a break,” Matt said. He glanced at Clark. “Josh is my boyfriend.”

“I gathered as much,” Clark said.

The waitress approached and set down Thomas’s spaghetti, Matt’s salad, and ... Clark’s steak and baked potato.

Clark smiled in his direction. “Spaghetti? Aren’t you worried about splashing marinara on your white dress shirt?”

Thomas looked down at his shirt, dismayed. “Fuck, I didn’t think about that.” Then he felt his cheeks heat. “Sorry.”

Clark laughed. “I’m not your mother, Thomas.” He grabbed the green cloth napkin in front of Thomas. “Here, let me.”

Thomas held his breath as Clark leaned toward him and carefully tucked the napkin in the front of his shirt, his long, elegant fingers lingering on Thomas’s throat. Their gazes caught. Thomas swallowed. His achingly hard cock strained against his slacks. 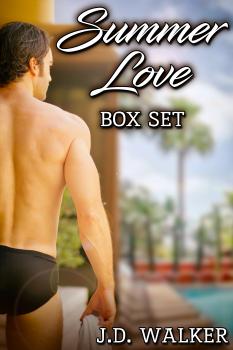 The Cat that Snared the Tom
Charlie Richards
In Shelf
$4.99
Tweets by
sirenbookstrand