A wildly entertaining roller-coaster ride, this novel combines ferociously clever slapstick, frenetic satire, and extremely sizzling love scenes to expose a turbulent 1980s Montreal. While following petty thief, drug dealer, and ladies' man, Johnny, as he explores his sexuality and unearths political cover-ups, this complex narrative examines issues of sexual power and individual identity, the nature of bureaucratic tyranny and political control, and the effect of history on us all. Concluding with the Montreal massacre, this is mostly a bittersweet romance: a love letter to a time and a place.

A BOOK FOR READERS SAVAGE & SMART Reviewed by Margaret Wagner Mount Royal shakes you up like a freight train, hitting you with the brash sounds and hell-bent forward motion of an underground culture fueled by high octane drugs, sex, disobedience, and a singular lack of remorse. The sex is unsparing and incredibly lush. It is a love story, in the sense that being honest in the portrayal of human passions and complexity without passing judgment is the essence of love... Margaret Wagner - Amazon 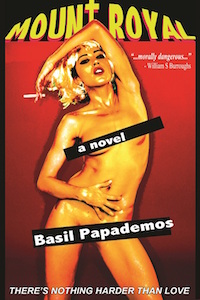