Amber has had a fierce crush on Nate, her brother Bryan's best friend, since she was nine years old. Now that she's almost old enough to date, she knows who she wants her first boyfriend to be. Unfortunately, Nate doesn't really talk to her, and Bryan won't set them up.

Then Amber finds out why. 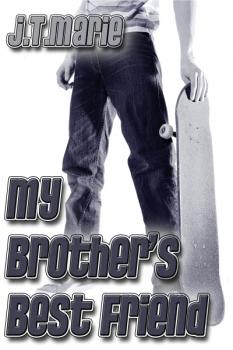 A few days before my fifteenth birthday, I decide to put some feelers out, see if I can maybe somehow jumpstart the whole boyfriend thing by getting Nate to ask me out. Since I’d never actually dare to talk to Nate directly, I focus on Bryan instead. One night after dinner, a rare evening when Nate isn’t around because his family’s Baptist and make him go to church service on Wednesday night, I find my brother at the kitchen table taking a practice SAT. Pulling out the chair across from him, I sit down in it and watch him bubble in the circles with his pencil. An eternity seems to pass before he decides I’m not going away and mutters, “What?”

As nonchalantly as I can, I start, “Shelley wants to know why you don’t have a girlfriend.”

Bryan glances up from the test, his brows furrowed into one long unibrow across his forehead. “Who the hell’s Shelley?”

“OMG, she’s only my BFF!” Is he for real? Shelley’s been hanging out with me since the fourth grade. “You’ve seen her, I know you have.”

Bryan sticks out his lower lip and blows his bangs out of his eyes. “Why’s she care if I’m dating someone or not?”

I sort of shrug and roll my eyes, not wanting to come right out and say anything, but another long moment passes before I realize either my brother isn’t paying attention to me or he’s the thickest boy I’ve ever met. Probably some combination of the two. “She just asked ...”

Suddenly, it clicks. “I’m not going out with her, if that’s what you’re hoping for.”

“Fifteen,” Bryan points out. “And your best friend. So no.”

I hurry on. “But wouldn’t it be cool if you two got together? Then maybe Nate and I could --”

“Nate!” The tip of Bryan’s pencil snaps off. “Oh, no. We’re not having this conversation. Mom! Amber’s trying to get me to get Nate to ask her out!”

“Shut up, will you?” I lower my voice to try to get him to lower his, too. Fortunately Mom’s down in the laundry room and doesn’t hear him. “I’m not trying to get you to get Nate to do anything.”

Bryan digs another pencil, already sharpened, out of his bookbag, which rests on the floor by his feet. “Damn straight,” he mutters. “Aren’t you too young to go out on dates, anyway?”

“Well, cross Nate off your list,” Bryan says, bending back over his test again. “He’s my friend, he’s too old for you, and besides, he isn’t interested, anyway.”

Suspicious, I ask, “How do you know? Maybe he likes me.”

Bryan scoffs and doesn’t bother with a response.

“Maybe he does,” I press. “If you don’t ask him about me, you won’t know what he thinks, will you? He doesn’t have a girlfriend, does he?”

With an exasperated sigh, Bryan bunches the test paper into his fists as if he wants to tear it in half. Then he forces himself to take a deep breath and glares at me across the table. “Amber, stop. Nate is not interested in going out with you, or Shelley, or any other girl at our school, okay? Trust me.”

“I never said Shelley,” I clarify. Hello? I said me.