Ed’s vacation means a Gold Coast apartment for the summer. He’s suffering from a social anxiety disorder so he sees and speaks to nobody for the duration—other than his cousin Elmo who’s a leech that he can’t seem to get rid of. For Ed, as a big-time author, summer means working on his next best seller.

Gus, an American from North Carolina, is a male nurse at The Gold Coast Hospital. When a patient pleads with him to break the news of his hospitalization to his cousin, Gus agrees.

Opening his door to a stranger is almost a first for Ed. The visitor’s accent, before he so much as catches a glimpse of him, is enough to get Ed excited. When he does see him, he reckons that the guy is hot enough to make his hospital scrubs sizzle. Suddenly, for Ed, the summer is looking up, while for Gus, he wonders why the strange guy is answering his door dressed only in his underwear.

I gave him full marks for persistence. Fortunately, seven years of nursing had given me immunity to hot guys with inflated egos asking me out. They were invariably after the same thing, and I had no interest in one night stands. “It’s the same answer that I gave you last time, Elmo, and telling me what a cute American accent I have will alter nothing.” I spared him my opinion that he acted far too fem for my tastes, plus the non-negotiable fact that I didn’t date guys who partied on drugs.

“Can you at least tell me when I’ll be released?” he whined.

“Same as the last time you asked me. You’ll need to wait for the doctor. Anyway, why are you in such a rush to escape?”

“Shit, I’m up from Sydney on summer vacation and meant to be having fun…you think I want to spend all my time in here?”

Raising my eyebrows, I behaved unprofessionally by being judgmental. “You ought to have thought of that before taking those pills from some guy you didn’t even know.”

Elmo smirked. “Don’t you ever have fun?”

“If you call ending up in hospital fun, then no, I don’t.” I was rapidly losing my patience with him. I glanced at my watch. “Anyway, if you don’t mind, my shift ended five minutes ago.”

Elmo suddenly appeared apologetic. “Sorry…what did you say your name was?”

“Nurse McCauley,” I snapped. I just wanted to get home. Not that I had anything or anyone to rush home to.

“No, tell me your first name.”

“Well, Gus…would you mind doing me a small favor?” he asked.

“A favor?” I became immediately suspicious. “Specifically, what type of favor?” I asked.

“I need to let my cousin know what happened. When I collapsed at the club, some prick took off with my phone, and it has all my numbers in it. Ed, my cousin, he’s leased this stunning apartment for the summer, and he’s letting me stay with him.”

“So?” I had no idea where I fitted into this.

“I’ve got to let him know where I am. Ed sort of worries a lot…too much.”

Where do people get the idea that because I’m a nurse, my caring extends beyond the ward? “Give the police his details, and they’ll let him know.”

“No, not the police.” Elmo reacted too quickly.

“A problem?” My mind immediately thought drugs, that sort of stuff.

“It’s not what you’re thinking, Gus.”

I smiled. “How do you know, Elmo…you psychic or something?”

“Point taken.” I let it drop for a moment and then asked, “So…why not the police?”

“Well…” Elmo hesitated. “Ed is a bit different and has trouble relating to people.”

I thought about it for a moment, then said, “I’m sure the police would deal with it sensitively.”

“The cops would freak him out.” Elmo shook his head. “I can think of one way that might work…” He shot me a beseeching look. 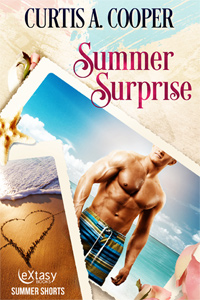 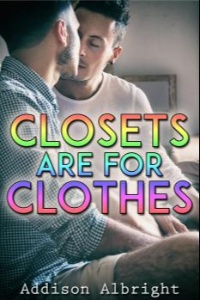 Closets Are for Clothes (MM)
Addison Albright
In Shelf
$3.99
Tweets by
sirenbookstrand