Chloe needs a place to crash for the summer before college. When Chris offers, she moves in with him. It’s just for two months, no biggie. But soon she realizes she may have made a mistake. He's too perfect—a former snowboarder, laid-back and kind to boot. And he’s smitten with her. But she’s got trust issues and a relationship feels daunting. When he keeps trying to win her over, the temptation becomes overwhelming.

Just as she gives in and decides it’s not worth fighting their emotions anymore, Chris reveals he’s made a stupid mistake which might ruin Chloe’s trust in him and tear them apart.

14+ for sexuality and adult situations 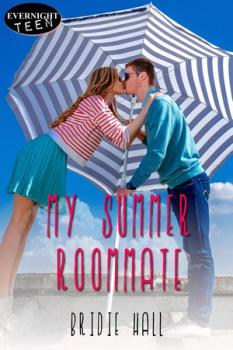 I bring him a frozen gel pack. I want to hand it to him, but he’s leaning back, his eyes closed, so I put it slowly on his knee.

“Thanks.” He sighs, and then opens his eyes. He’s half asleep, probably still tipsy, but grinning.

“Thanks,” he repeats. It’s only when he continues that I realize he’s not talking about the compress. “We should do this again soon.”

“People are going on vacations. There won’t be many parties for the next month or two.”

“Just us, then,” he says, and his eyes sparkle.

Risking that I might sound an idiot, I ask, “Are you asking me out? On a date?”

“Just hesitant,” I say. “I’m not looking for a relationship, Chris. I don’t want you to think that I am.”

Quite unexpectedly, he laughs. “How serious and grown up she sounds.”

I swat his arm. “Jerk. I am serious, because I don’t want you to expect something that’s not going to happen.”

“Why is it not going to happen?”

“’Cause,” I say, as if it should be obvious. Because really, it should be, right? In exactly six weeks, I’ll be moving to Atlanta. I don’t know where Chris is heading to college because I haven’t managed to ask him yet. Isn’t that enough of a reason in itself? You can’t have a relationship with someone when you don’t even know where they’ll be in two months’ time.

“’Cause? That’s your argument? For a future psychologist, that’s a lame-ass explanation.”

He’s enjoying this. Way too much.

“’Cause I only date terrible people. Bad, bad boys. You’re too nice for me,” I say, joking.

He makes a face, not buying it for one second.

“You want a reason? Here’s a good one—I don’t want anything to happen between us.”

“I have my very personal reasons which I am not inclined to share with you at this moment.”

“At a later moment perhaps, then?” He keeps looking at me with this half-smile on his face that drives me nuts because I have the impression that he’s playing with me, that he can foresee my every word and that he can prepare his response in advance. I don’t like being two steps behind. Usually, I’m the one to have everything under control. He’s unbalanced me with this.

“At no moment at all. I just don’t want it, and that should suffice, Christopher Quinn.”

“How can you be sure you won’t change your mind?”

For god’s sake, can’t he take a hint?

Maybe you’re not convincing enough? Because … you don’t want to be?

“Because I’m actively working on not changing my mind,” I say in order to drown out my evil inner voices.

“What if I’m actively working on swaying it?”

It gets worrisomer when he leans towards me and asks very quietly and calmly, “Why?”

With his green eyes staring at me, his deep voice cutting right through to the core, and him being so close, I feel goose bumps form on my forearms but I ignore them, annoyed. He will not win. He cannot win.

But the worst thing is that his question is now resounding in my head, and I forgot what the correct answer was. Why was it, again?

“Do you really want me to spell out all the reasons?”

“And you’re the one who decides if it’s good enough, right?”

“Of course. Because the way I see it, it would have to be pretty damn good. I like you. You like me, don’t try denying it.”

I lift my hands in a ‘wouldn’t dream of it’ fashion, because really, there is no point in denying it after I’ve flirted with him, danced with him, and laughed with him until I had tears in my eyes. I do like him.

“We have a good time together. I’ve made you lunch four times this week. We’re both single.”

“True. And the lunch almost swayed me. Almost.”

“Ahh,” he moans, letting his head fall back onto the pillows. “You’re hopeless, and I’m hopelessly falling for you.”

For a moment, I feel my heart stop. But then I realize he’s joking. Which is good. Just great.

“You’ve known me for what, two weeks?” I say to support my claims. “You barely know me.”

I make a frustrated sound and get up from the couch.