My Summers With Benny

Fourteen-year-old Alex Moran spends every summer with his father and this year his dad has moved next door to Benny Harper and his aunt. When he meets Benny, he finds an outgoing boy his own age that shares his love of reptiles. Benny doesn’t have any other friends though because he’s been HIV positive from birth and no one understands. They’re even afraid of him, which is something Alex doesn’t understand at all.

They spend nearly every day together during that first summer and each summer after that they come back together. Their lives change as they grow up, but their friendship only gets stronger until it gives way to love and Alex realizes that his dad moving next door to Benny was the best thing to ever happen to him.

Nothing is as good as being in love with his best friend, and over the years Alex realizes just how much Benny means to him. He doesn’t know how long he’ll ever have with Benny, but whatever time he does have he’s determined to make the most of it. 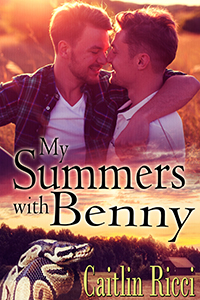 My Summers With Benny

When I was fourteen, my dad moved from Denver to Franktown. It was half an hour south of where his house had been if he took the highway. If he took the street roads, like he preferred to, sometimes it took an hour if we got stuck in traffic. I loved my dad, but I really didn’t like how he went the long way whenever he picked me up from my mom’s townhouse in downtown Denver. Ever since I was three and they split up, I’d been spending the weekends with my dad in Aurora and during the week, I’d be with my mom. During the summers, I’d be with my dad which was great because I could still see the friends I’d made during the summers I’d spent in Aurora.

But with my dad in Franktown, I suddenly didn’t have any friends nearby. I’d kept the same schools with my weekday friends since I’d started first grade and only two of the ten guys I hung out with on the weekends and during the summer had moved away when their parents had been transferred.

Now though it was me who was leaving everyone and spending the summer in a big yellow house on the south end of Franktown. I’d seen more horse trailers than cop cars and there wasn’t even a mall that I’d been able to see. Just a lot of houses with barns in their backyards like I’d stepped into some kind of rural horse community.

My dad didn’t have horse property, but he did have a really big backyard, especially compared to my mom’s which was barely big enough for her little herb garden. Dad’s house had yellow vinyl siding and white shutters. There were pink flowers in long patches of dirt along the front of his house and down either side of the curving sidewalk. What I noticed though, more than anything else, was that in the house next to my dad’s on the right, in one of the upstairs rooms, a boy was looking down at me as I got out of my dad’s car.

“Who’s that?” I asked my dad as I grabbed my blue suitcase out of his backseat. I already had my backpack over my shoulder.

He looked up at the house, too, and put his hand over his eyes to block out the sun. Once he saw the boy, he smiled and gave him a wave before turning his attention back to me. “That’s Benny Harper. Maybe you should try to make friends with him over the summer. I don’t think he gets out much. But then again I’ve only been in the house a month now.”

A guy my age that didn’t have friends? That was weird. I was still watching Benny as I asked my dad, “Is there something wrong with him?”

My dad slung his arm around my shoulders and pulled me away from looking up at Benny and back toward my dad’s house. “Come on. Don’t be rude. Let me show you around the house. There’s two bedrooms left so I want you to pick the one you like most.” I let my dad pull me away as he started to show me around his new house.

Stolen by the Otter
A.J. Marcus, Caitlin Ricci
In Shelf
$3.99
Tweets by
sirenbookstrand