Never Give Up on Love Box Set (MM)

Elias: Thomas Doyle and Elias Byrne couldn’t be more different. A loner cop and a tough kid with a very hard life and a history of violence. Elias makes his way through Thomas’ life with no regards for rules and roles. He wants Thomas, he wants to be seen. Accepted. Even if he doesn’t know how to reciprocate. Their story has the potential to crash them both, especially when Elias’ life gets in the way.

His Scar: A car wreck leaves Ryan with a facial scar he believes people find unsightly. But not Sean, a smiling tattoo artist who doesn't judge a book by its cover. But convincing Ryan to open his heart is proving to be quite a challenge. When someone from Ryan's past offers him what he wants most in the world, Ryan has a decision to make. Which voice will he listen to -- his heart or his head?

Silent Night While dressed as Santa Claus, Pete meets Lucas, a deaf-mute living on the streets. When Lucas is attacked and robbed, it gives Pete the opportunity to invite him home for Christmas. But can they live together long-term? Will Lucas's bid for independence break their hearts or bring them to deeper understanding?

Never Give Up on Love Box Set (MM)

We sit at a table and the conversation is really pleasant, so nice that unusually I move my hair away from my face twice without even realizing.

“You should do that more often,” Charlie murmurs, leaning a hand on my arm.

“You see it like that. Listen, Ryan. Obviously, people can see it. And it’s natural they might stiffen for a second when they notice it. But I can tell you it isn’t because of scorn or disgust. It’s because the first thing you think is that something bad happened ... and you feel speechless. I mean, you feel sorry.”

I look at Charlie and feel deeply touched. I squeeze the hand she leaned on my arm and tilt my head sideways.

“Thanks, Charlie,” I whisper, smiling.

“And above all, yes, it’s true you have a scar, but there’s a guy staring at you.”

Suddenly I raise my head, surprised. “What?”

Charlene nods her head to my right and I turn, gazing around, trying to figure out who’s looking at me.

I immediately understand as soon as I see a mass of honey-blond curls. Sean. I blink and move my hand up from the table to greet him. Sean smiles and lifts his glass.

And a second later I yelp in pain because Charlie’s nails dig into my arm.

“Do you know him?” she mouths excitedly. She seems shocked and ready to explode.

“But do you see how he looks at you? Ohhh, you have to invite him over to join us!”

“Did you hit the beer tap before sitting down? No way!”

“And how soft his hair must be!”

Charlie looks at me, showing she understands, and nods like I’m a small child. “Honey ... number one, you don’t need to know what size underwear he wears to invite him over to our table. Number two, single or not, I don’t expect you to have sex on the table in front of us. It’s a public place, in case you didn’t notice. Number three, trust me, love. The way he looks at you, he’s gay and he’s interested in you. You know, if his eyelashes had hands, you would be naked right now.”

I look at my friend as if she’s an alien. I will never get used to the way she can floor me.

I haven’t even finished my sentence when, to my horror, I see Charlie standing up and heading towards Sean. I give Frank an imploring look, but he only shrugs.

“This is between you and her,” he says, lifting his hands with half a smile.

“But she’s your wife!” I look over at Charlie who’s now talking to Sean.

“I know, but I love her for what she is.” Frank chuckles, crossing his hands over his belly.

“I do, too,” I whisper, my voice trembling when I see her coming back with Sean.

“Hi,” I answer, having a little coughing fit.

For an instant I’m afraid Charlie’s going to slap me. Frank looks at me with little sympathy while Sean stands there with the stool, not moving.

“Oh. I’m sorry. Charlene told me ... nothing. I don’t want to disturb you,” he sputters, putting the stool back in its place, getting ready to walk away.

I know I have to do something. Every time it comes to Sean, I say something terrible, and I feel bad about it.

“Hey!” I call him back, reaching out my hand. “I’m sorry. C’mon, sit down ... I have a bad temper, I know. I promise I’ll try not to insult you for the rest of the night.” This wasn’t much better, but at least it was a start. 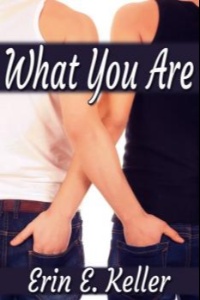